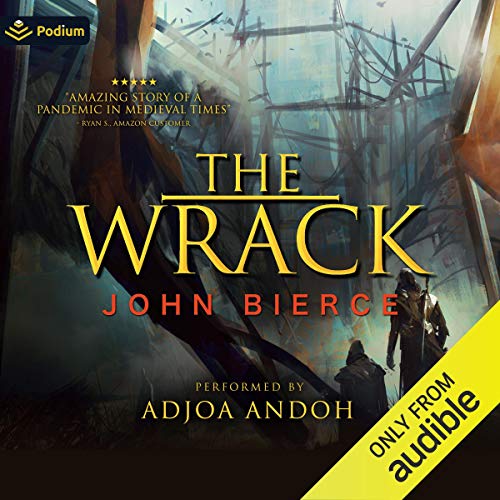 Plague has come to the continent of Teringia.

As the Wrack makes its slow, relentless march southwards, it will humble kings and healers, seers and merchants, priests and warriors. Behind, it leaves only screams and suffering, and before it, spreads only fear.

Lothain, the birthplace of the Wrack, desperately tries to hold itself together as the plague burns across it and its neighbors circle like vultures. The Moonsworn healers would fight the Wrack, but must navigate distrust and violence from the peoples of Teringia. Proud Galicanta readies itself for war, as the Sunsworn Empire watches and waits for the Wrack to bring its rival low.

The Wrack advances, utterly unconcerned with the plans of men.

What listeners say about The Wrack

I was a bit skeptical at first but there’s a few things that this book absolutely nailed.
The narration was phenomenal!!! So expressive, while sometimes the characters blurred together for me, I couldn’t get over how good it sounded. The story itself is super well done, from an epidemiological standpoint I was floored. Bierce put so much research and depth into the wrack that it felt like some other real life events.
I’m an instant Adjoa Andoh fan now, loved her performance.

Authors be careful what you write about!

It’s creepy how much this story gets right about our current situation right now; even down to the symptoms. I realize that it was just published, but I read a post by the author from 2019 where he writes about being in the middle of finishing up this book. I wonder if he edited it in the past few months to be more relatable but it still seems like a eerie focus to take up and then have come to life almost immediately as one finishes a project. It’s like the myth of the magic paint brush with a pen instead.

Apparently life imitates art now so I am just going to say this story is uniquely fascinating because it’s both fantasy and reality; go ahead and be forewarned you will be unsettled and drawn into a magical world that is uncomfortably familiar and entirely believable. I haven’t finished it yet so I have to hope that it’s got an ending that will give me confidence in this world.