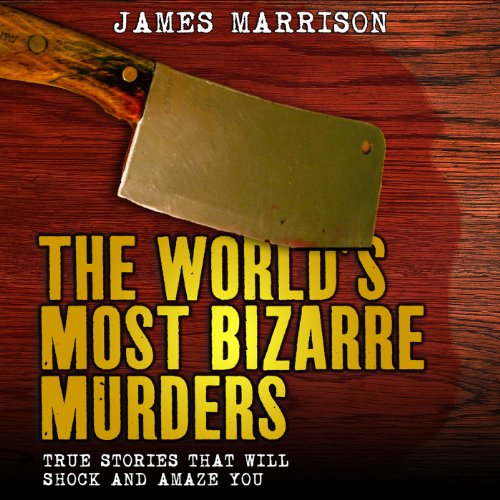 The World's Most Bizarre Murders

True Stories That Will Shock and Amaze You
By: James Marrison
Narrated by: Drew Campbell
Length: 9 hrs and 6 mins
Categories: Non-fiction, True Crime
3 out of 5 stars 3.3 (4 ratings)

The World's Most Bizarre Murders

This is no ordinary true crime book. If you think you've got the stomach for the most blood-curdling, sickening and downright strangest murders you will ever come across, then look no further than these pages. You have been warned...

Take, for example, Enriqueta Marti who kidnapped children from the streets of Barcelona, then boiled away their flesh and crushed their bones for ingredients for her coveted 'magic potions'.

Or take Randy Kraft, known as The Scorecard Killer, a computer genius by day and a deranged psychopath by night. Finally arrested with a corpse slumped in the passenger seat of his car, it emerged that Kraft had spent over a decade cutting up and disposing of his numerous victims along the California highways.

In this stomach-churning collection, all the stories have one thing in common - a unique bizarre twist. True crime writer James Marrison draws upon the material that has featured in the hugely successful column The Murder File in cult magazine Bizarrein order to disclose the kind of sickening deeds that are perpetrated more often than you might think, but which sometimes go largely unreported by the media. Welcome to The World's Most bizarre Murders - the most shocking true crime book you will ever read.

What listeners say about The World's Most Bizarre Murders

I found most of the stories to horrific to possibly be true but amazingly they we're!! Really gory stuff but a really great listen all the same...

Oh, just the narration and production. Clearly this was either sloppily done, or rushed to completion. There are many false starts, flubs and 2nd takes that should have been edited out of the final master. You'll hear the narrator read the same line two, and sometimes three times until he gets it right.

Though his inflection is fine his mispronunciations and flubs are numerous. At first it was kind of funny to hear him say things like "Sodium Penthonol", (instead of Sodium PENTothol) and "Drink Driving", (instead of DRUNK Driving) but eventually it really annoys you and takes you out of the book. Some other gems include "Judicinal System" and Shrever Port Louisiana. Once again, this might be because the production of the audio book was rushed or sloppy. You can't blame the guy for flubbing some things or pronouncing them incorrectly if he's not familiar with them, but come on! Catch it before it gets posted to Audible!

If you can get past the terrible narration and production the content is actually fascinating. A little gory at times, but definitely interesting for the true crime fan. Also, since each chapter is self-contained and not too long it makes for a great back-and-forth-to-work kind of listen.

Where does The World's Most Bizarre Murders rank among all the audiobooks you’ve listened to so far?

If you're looking for a no nonsense, to the point true crime read..you will enjoy this book..

I see several reviews had a negative opinion of the narrator.. I loved his accent and his dialect made the book very interesting... He did however mispronounce several words..

Overall, it was a great quick read and Drew Campbell's voice kept me continuing to the next chapter..

Ok but not great

For the most part yes. A lot of data/events but not very detailed on any one event.

Fewer events with deeper analysis of each case.

I did not care for the performance. It is evident that there was not much editing....if any.

Was The World's Most Bizarre Murders worth the listening time?

It was ok, but not riviting.

What made the experience of listening to The World's Most Bizarre Murders the most enjoyable?

I first checked out the reviews before I bought this book. Seeing all the negative ones made me a bit skeptical but I went ahead and bought it anyway. . being a true crime buff. I was presently surprised. The story was very interesting and the murders were most definitely bizarre.

What was one of the most memorable moments of The World's Most Bizarre Murders?

Most of the crimes were ones I had never heard of before. I'm shocked at the brutality and twisted thinking of the criminals in this book.

The author did a great job. I didn't notice any mispronunciations. If they're were any, I was too enthralled in the book to notice. Those who complained of "drink driving" need an education on how other countries describe the crime. Only in America do we call it drunk driving. Drink driving is the appropriate form of the noun elsewhere.

I never wanted to put the book down!

If you love true crime, disregard the negative reviews. You will most certainly love this book as much as I did.

awesome content and loved the narration. Would definitely recommend this book I've listened to it several times already

Took a While to Get Used To

I'd recommend it to anyone who likes true crime stuff, with a cautionary word about the reader. I was able to get used to his voice, but it is rather strange.

What was one of the most memorable moments of The World's Most Bizarre Murders?

It wasn't a fiction book, so it's really hard to answer this question. Audible should differentiate the questions for fiction and non-fiction, really :-p

Have you listened to any of Drew Campbell’s other performances before? How does this one compare?

This was the first book I bought of his, and it'll probably be the last (save the one I already bought, I got two at once). It's not as horrible as some other reviewers have said, but it is weird. His accent is very weird, like it's not real or something. That's really all that's wrong, though. He does a good job with the reading part.

All in all, it was a pretty great book. A few cases I already knew, but mostly stuff that I haven't, which is getting rarer and rarer with all the true crime stuff I read about and watch on TV. It gets a very good 8/10 from me.

did no one edit this reader???

No one. No one ever. I have no idea if the story is any good because the reader was so bad.

Would you ever listen to anything by James Marrison again?

as long as it wasn't read by Drew Campbell, I might consider it.

He Can't Read Out Loud. Or maybe he just didn't get the performance cleaned up by an editor. Either way, totally wrecked the book for me.

If you could play editor, what scene or scenes would you have cut from The World's Most Bizarre Murders?

who knows? I missed out on most of it because I was so distracted by the reader.

The reader continually reads a sentence, starts it again, breaks off in the middle and gives the sentence a different reading, mispronounces names and just words in general and corrects himself constantly.Did NO ONE ever edit this book before unsuspecting people bought it??? Every time I got settled into his reading, he'd pull another mistake and I just ended up stopping listening to it all together. I wish I could return this one! What a loss!

This really is an appalling book, and my advice is to stay away from it. The reader is awful, with terrible pronunciation. The production is bad too, as there are at least two stumbles and re-reads which have NOT been edited from the piece.

this one made me shudder a few times and introduced me to some gruesome criminals that I hadn't heard of previously. narrator was great once I sped him up a bit.

Did anyone listen to this first?

Would you try another book from James Marrison and/or Drew Campbell?

The book is interesting, covering famous and unknown murders/murderers. Many of them I had read in books, but there were some that were "new" to me.

I have no doubt that it is difficult to sit and read outloud for multiple hours, but I keep wondering if no one actually edited this. The accent isn't an issue, but the mispronunciations of name & places is very distracting. Plus there are many areas where the reader hesitates & corrects himself (which is fine, but didn't anyone think to cut these parts out?) I've listened to hundreds of audio books in my life,but this has to be the worst editing I've ever heard. I don't blame the reader, just whoever put this on the market before it was finished.

Narrator does his best to turn interesting into dull. Sounds like he's reading a list & often stumbles with his words.

Who picked the narrator?!

Would you try another book written by James Marrison or narrated by Drew Campbell?

Written by the author, I may try another title. Read by the narrator, never!!! He mispronounced more words than he read correctly!!! He stressed all the wrong words in every sentence and didn't seem to have a clue what he was reading!! It made it so hard to listen to, never mind follow!!! Really amazed it wasn't edited more or better yet, get someone who can actually read to narrate!!!!!! Not impressed.

What could James Marrison have done to make this a more enjoyable book for you?

Chosen a different narrator!! It made it very hard to review his writing with such awful narration.

Everything!!! See above!!! He clearly didn't read the book before recording his narration, if he did, he needs help with his reading and speaking!!! Just awful and ruined a perfectly good book.