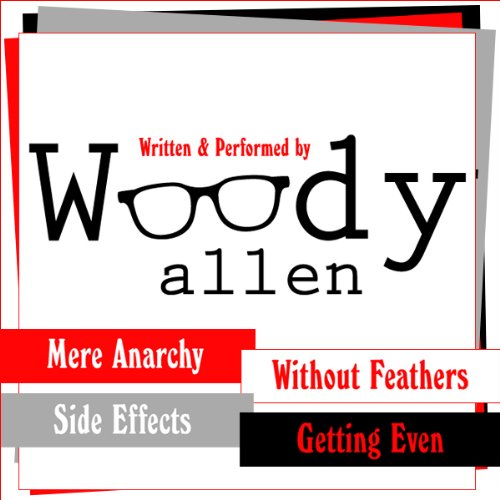 Reading a joke never sounds as funny as hearing one. Comedy needs to spoken out loud. We need to hear the words and the awkward pauses for the humor to be released from a comedian’s chaotic mind.

Don’t believe me? Listen to Woody Allen narrate his collection of books. I’ve read many of Allen’s stories and essays over the years, especially his ‘casuals’ printed occasionally in The New Yorker. But listening to these same pieces read aloud by Allen completely transformed many of these works and took them to an entirely different level of comedic genius.

Allen’s performance of The Woody Allen Collection reminds us why he was one of the greatest stand-up comedians long before he became a world-renowned movie director. Allen has pitch-perfect timing. He knows exactly how to deliver his best lines for maximum effect. And he comes up with such outrageous, absurd ideas that might seem bizarre on the written page, but work brilliantly in audio. That might explain why you can occasionally hear Allen struggle to suppress his own laughter during certain stories.

Side Effects contains some of the most hilarious material. Written in the 1970s during Woody Allen’s height in popularity, Side Effects includes gems like “The Kugelmass Episode”, in which City College professor Sidney Kugelmass is magically transported back into the novel Madame Bovary. And if Allen ever needs an idea for a new movie, he should simply turn to Retribution, an understated piece that builds towards its priceless ending.

Getting Even features Allen’s earliest and some of his best work. Published in the late ‘60s and early ‘70s, Getting Even reminds us why Allen was such a hugely popular comedian on college campuses around the country. Academia and its pretentious obsessions serve as fodder for “The Metterling Lists”, “My Philosophy”, and “Spring Bulletin”. Allen’s skills as a satirist shine in literary parodies like “Notes from the Overfed” (his riff on Dostoevsky) and “Death Knocks”. And there’s nothing quite like the series of ridiculous letters detailing a chess match in “The Gossage-Vardebedian Papers”.

The highlights of Without Feathers include “The Whore of Mensa”, a spoof of hard-boiled gumshoe detective novels about a private dick trying to crack a case about a racket involving high-class call girls who specialize in the tawdry art known as literary criticism. But the best story here is “If the Impressionists Had Been Dentists”. Written in the style of Vincent Van Gogh’s letters to his brother, this short work imagines the French Impressionist painters vying not for artistic glory, but for executing the perfect root canal.

Mere Anarchy reminds us why Allen remains relevant. It contains his most recent works, many of which first appeared in The New Yorker. Not surprisingly, Hollywood and its excess serve as fodder for several of Allen’s asides, including “Caution: Falling Moguls”, “Poison Ivy: Final Cut”, and “This Nib For Hire”, an especially absurd story about all the world’s great novelists making money off novelizations of movies. But the best piece in Mere Anarchy is “The Rejection”, a hysterical tale about a Manhattan couple’s struggle to get their son into the best private nursery school. What makes “The Rejection” so good is what makes Allen’s best work sing. Beneath all the absurdities and zany plot lines there lies a kernel of truth.

Woody Allen – writer, director, and actor – can now add narrator to his long list of achievements, as he's made his best-selling books available in audio for the very first time. The Woody Allen Collection, featuring four of his classic short-story books, highlights the comedian's biting wit and signature style – performed as only he can. These hilarious stories examine the deepest of human questions from the highest heights of absurdity. Allen muses on the relativity of space-time and how it can make a person late for work, the Cosa Nostra’s office-supply spending habits, the Frean - a sea monster with the body of a crab and the head of a certified public accountant - and much more.

Everything is fair game, including art, food, crime, sex, death, and dentists. As the New York Times raved, included are "brilliant flights of fancy whose comic detail and inspired silliness are at once dramatic and controlled... by the celebrated stand-up Flaubert."

The Collection includes Woody Allen’s four books Without Feathers, Side Effects, Mere Anarchy, and Getting Even, as well as an exclusive interview conducted with the author/narrator, in which he discusses the process, challenges, and rewards or recording his books for the first time.

"Throughout my life, literally thousands of people have made me feel inadequate, but none more so than Woody Allen." (Larry David, Producer, Writer, Actor)
"Woody Allen brought modern comedy to the cinema screen." (Ricky Gervais)

What listeners say about The Woody Allen Collection

Well worth the wait

When Side Effects was released in 1980, I was a freshman in high school and I bought the book immediately after reading a few lines from one of the stories, "Remembering Needleman":

"It has been four weeks, and it is still hard for me to believe Sandor Needleman is dead. I was present at the cremation, and at his son's request, brought the marshmallows, but few of us could think of anything but our pain."

I simply loved his style of writing and I often tried to emulate it in my English assignments. In fact, I often managed to work the character name "Needleman" into my writing. I was a big fan of comedy in general and his book came out at a time where I found myself studying the art itself, so much of my own sense of humor was a direct result of his books.

Over the years, I have read all of the other books with just as much enthusiasm and now that I'm an audiobook addict, I would often search for these books on Audible just to see if anyone recorded an audio version I can hear in my car. Thankfully all four books are now all here and as an added bonus they are all narrated by Woody Allen himself.

Woody Allen is not for everyone. He doesn't base his comedy on potty humor or use foul language. His comedy can be silly at times, but it's always funny or at the very least, fun to read... and now at last, to listen to.

Uneven but you may laugh out loud

Some of the stories in this collection are downright ridiculous. Others are world-class comedy that leave one breathless at the author's brilliance and occasionally laughing out loud. A listener can't imagine any being read by anyone other than the author in that persona and voice we know so well from his early films.

He does NOT sound old on these recordings. He sounds like he's always sounded. On the mp3 quality downloads he sounds just fine. Upgrade your downloads if he sounds strange. This stuff is hilarious. Don't miss it.

If you could sum up The Woody Allen Collection in three words, what would they be?

I have found this collection to be an excellent study of the man. Woody Allen doesn't enjoy doing the interview, but that clip was very revealing. I learned a great deal by his admissions.He struggles and spends long periods of time on some pieces while others will roll out easily. Not everything he creates is gold. He says that he wrote some pieces to fatten up the content. (Wow! Really? He's just a man) I really enjoy listening to his own narration. His voice quality is very good. I don't hear a loss due to aging.

I don't know if he intentionally does it or not: his accent gets more severe in many places. Its kind of funny when that happens. That may be an element of his aging. It could be another gag? Whatevaah,... its a welcome addition. He was never a spring chicken. In his first movies like Take The Money And Run, he seemed like he was at least forty. So what's too criticize about his age? If anything, its like listening to grandpa. And grandpa can still bring it.

Who was the most memorable character of The Woody Allen Collection and why?

For students of Allen, those that want to know his process. This collection is awesome. I used to do stand-up comedy and in the beginning of that ride, I wondered why Woody Allen got out of it. Listening to this collection has answered that question. After the thrill subsides, stand-up comedy becomes predictable in its structure. Its more interesting to create stories that are filled with jokes. The format is more rewarding as the creator.

Woody Allen reads his own words as if he was reluctantly paying off a debt. It diminishes the wit of the writings. I would rather read him than hear him do an injustice to himself.

That the writing is old Allen is good- he was hilarious. But the stories are read by the old, as in aged, Allen. He has lost the energy and spark and sounds very tired. What a shame. Get the books instead.

These are the ramblings of an insane mind. I mean this in the bad sense. I am a fan of Mr Allen so I bought the books. Money down the rat hole. BOO. I didn't want to give this book any stars but Audible made me do it.