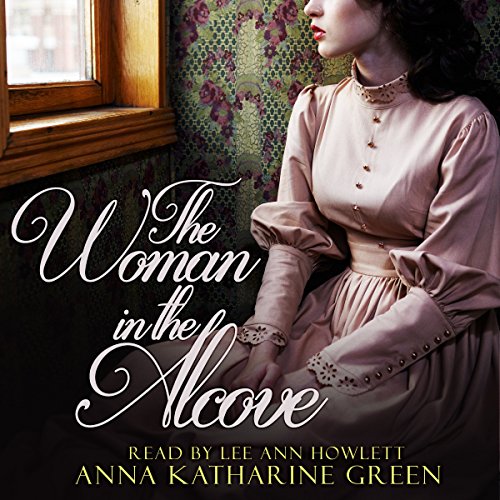 During a high society party set in New York City in the early 1900s, a beautiful woman is murdered and her precious diamond stolen. A young woman attending the party had just accepted a marriage proposal from a handsome young man. Unfortunately, the young man is the prime suspect in the murder due to circumstantial evidence. From there, the story takes many twists and turns before the identity of the killer is finally revealed.

Anna Katharine Green was one of the first writers of detective fiction in the US and was known for the legal accuracy of her stories.

What listeners say about The Woman in the Alcove

An interesting but convoluted story.

What did you love best about The Woman in the Alcove?

The best aspect of the novel was the fact it was unknown - a 'lost classic', so to speak. But then again, there are reasons that some old books aren't better known.

The language was far too purple, but then that was exactly what people expected at the turn of last century so it isn't completely fair for me to criticise it on that basis. But I got very tired of the fact that anything that could be said in one sentence was actually said in a paragraph. It meant the pace was slow and it was easy to drift off.Also, the denouement was so convoluted it actually defied all belief. I felt that a bit of a nod to Ockham's Razor wouldn't have gone astray with this book.Sadly, I didn't warm to the main character at all. I don't know whether it was the language, the narrator or simply the story, but I felt pretty hostile to Rita the whole way through.

Have you listened to any of Lee Ann Howlett’s other performances before? How does this one compare?

No, I haven't. But her performance was good and her accent felt true to life. Accents are the thing that make or break a performance for me and my pet hate is when narrators try to do accents foreign to their own and fail at it. I felt myself getting ready to cringe at the British accent, but fortunately the narrator felt it best not to really attempt it. That definitely raised the quality of the performance for me (I am British/Australian, so it is very noticeable to me when either of those accents are done badly).

Not really, but that was because of the language and the very slow pace. I was curious as to what happened, but I knew it would take a while to get there.

I was provided this audiobook at no charge by the author, publisher and/or narrator in exchange for an unbiased review via Audiobook Boom

A rather flat mystery

I didn't overly care for this book. Perhaps it is a product of the time it was written, but I found it to be quite flat overall. The main character wasn't very well-rounded and seemed more like a plot device than an actual character. She took very little action herself and mostly just seemed to be someone who either overheard or was told different parts of the story. I really wanted to care for her plight and to care whether or not her fiance would be found innocent, but what I felt at the end of the story was just relief that it was over. (And yet, I did still find myself compelled to listen until the end, to find out what had really happened.)

The audiobook narrator was okay. At first I found her voice and inflection to also be rather flat, portraying little emotion even in the first scene when the character should have had some emotion. But the more I got into the book, I realized that the fault is with the book itself rather than the audiobook narrator. So she did a good job with what she had to work with.

Note: I was provided this audiobook at no charge by the author, publisher and/or narrator in exchange for an unbiased review via Audiobook Boom.

This is one of the most boring books I have ever read.Lee Ann Howlett reads it ok, and her voices pick up the pace throughout the book.A murder,a big diamond, an investigation drawn out for too many hours.I was provided this book free by the author, narrator or publisher.

Words and Phrases that we just don't use anymore

It was a good mystery.


The author, Anna Katharine Green, lived from (1846-1935),
which means that this story was written a long time ago.
There were certain Words and Phrases that we just don't use anymore which made the story difficult to understand at times.
I found myself re-reading a couple of passages to make sure that I wasn't missing anything.
The word "ejaculation" was used several times and
the meaning was no where near what the word means in today's language,
for example:
"So I endeavored to do as he bade me, and succeeded, to some extent, for he uttered a slight ejaculation at one of its features, and, while duly expressing his thanks, honored me with a very sharp look."
See what I mean, people don't talk like that anymore. There were several other similar phrases.

Overall, I thought that the story was an engaging mystery.

Note:
"I was provided this audiobook at no charge by the author,
publisher and/or narrator in exchange for an unbiased review via Audiobook Boom."

I had to start this book over after almost halfway through. I had no idea what was going on. Who was speaking and when did the character change? The narrator did change her voice somewhat but I found her voice quite different than what I would have imagined the characters to sound like. It sounded very much like a Librivox recording without the annoying "this is a public domain speech" at the beginning of every chapter. I think a much softer and a bit younger sounding voice would have been appropriate. It also sounded like she was reading it rather than acting it if that makes any sense. Not too bad - I've heard much worse but it did occur to me frequently. Something about that seems to take me out of the story and then I get lost and have to rewind. I admit I got tired of rewinding and the last fourth of the book I just listened to without trying to keep everything straight.
I think I would have enjoyed this more had I read it.
That said I did very much enjoy the writing style and it is doubtful one would ever guess the ending (that introduction of previously unknown facts Agatha Christie style - and yes I know Ms Green pre-dates her). I believe this was written in the early 1900's. I do like the language of that period. I imagine a mid-aged Katherine Hepburn reading it. It has class and style and decent characterization.
I was gifted this book in exchange for an honest review of which I am very grateful. I do indeed plan to read more Anna Katherine Green.

Wow this was not what I expected

What disappointed you about The Woman in the Alcove?

The story started out good, but I guess when there is something exciting to write about it would. The rest of the story was so seriously slow that I could barely hold on.

I was surprised, but maybe that is because I had to force myself to stay awake to listen to is.

Who would you have cast as narrator instead of Lee Ann Howlett?

The only reason I could force myself to listen to the whole thing was because I couldn't stand not knowing who the killer was!

This audiobook was provided by the author, narrator, or publisher at no cost in exchange for an unbiased review courtesy of AudiobookBoom dot com