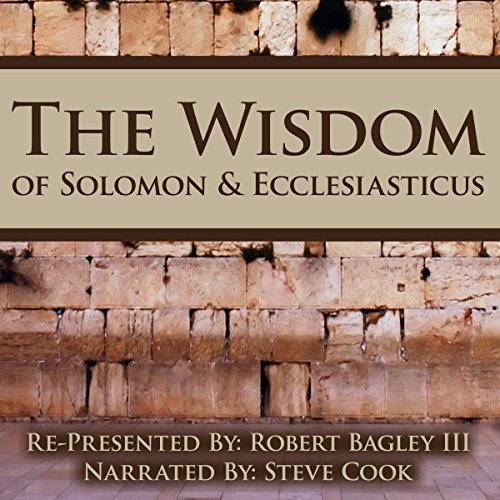 The Wisdom of Solomon and Ecclesiasticus

The Wisdom of Solomon and Ecclesiasticus

Both The Wisdom of Solomon and Ecclesiasticus are excerpt books from the Apocrypha. Here's a quick introduction to each:

Early Christian writers used this book and apparently respected its comparison of Greek philosophy and Jewish religion. The book contains essays of theological and devotional tone which theorize that faith is the highest kind of wisdom. The essays are written as if they are from King Solomon, and the book itself often goes by the title "Wisdom".

These writings in this book were originally in Hebrew, and then translated into Greek. They are the collected proverbs, statements and discourses of teacher Joshua Ben Sirach, translated by and his grandson. In early times this highly respected book was read during church.

What listeners say about The Wisdom of Solomon and Ecclesiasticus

Though I enjoyed the personification of Wisdom that the author puts forth, I struggled with the self-righteous perspective of the author. I especially struggled with the author's justification of his forefathers' genocide of people who did not agree with or value the virtues of his god. It is not hard to see why many Christian traditions removed this book from their cannon. The general mood of the book is a thinly-veiled nationalism and hatred of those with alternative perspectives. if I were to teach this book, I would teach it in the context of comparative religion and emphasize monotheisms being generally less tolerant than polytheisms.