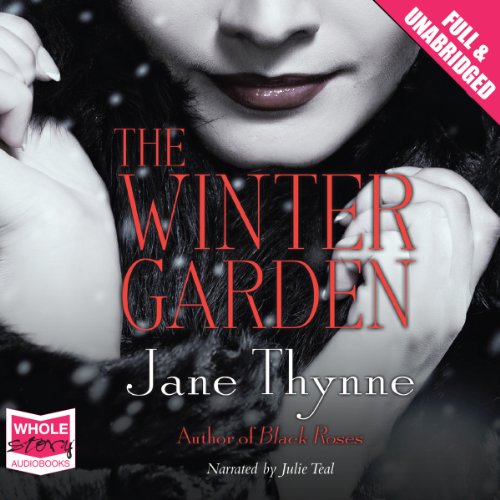 Berlin in 1937 radiates glamour and ambition. Anna Hansen, a bride-to-be, is at one of Hitler's notorious Nazi Bride Schools.

When she is brutally murdered Clara Vine, an undercover British Intelligence agent and Anna’s friend, is disturbed by news of her death. Clara must work to find the truth and send it back to London. It is a dangerous path she treads, and it will take everything she has to survive.…

"[T]he crosscurrents and dangers of the build-up to war are established with expertise and not a little menace. Terrific." ( Sunday Times on Black Roses)
"[Its] exploration of the Third Reich’s bizarre attitude to women gives it an original take on Nazi Germany." ( Mail on Sunday on Black Roses)

What listeners say about The Winter Garden

Not my usual genre but I thought it had good write ups so gave it a go. was really pleased I did because I thoroughly enjoyed this book in all aspects. Believable, good pace, interesting characters, interesting historical snippets, good story line and I was left wanting more.
It has also got me interested in the history of Germany and i'll be looking now for similar reads.

Would you try another book written by Jane Thynne or narrated by Julie Teal?

There's nothing wrong with the narration of Julie Teal but there's everything wrong with the character of Clara Vine, concocted by Jane Thynne. So no, I will never try another book of hers ever again. I find it an insult the way she portrays her "heroine". Someone thát thick could never have become a spy in real life.

What could Jane Thynne have done to make this a more enjoyable book for you?

If you could play editor, what scene or scenes would you have cut from The Winter Garden?

Pretty much all of them, I found this book a struggle. Not an enjoyable listen at all due to the story, not due to the narrator.

The only positive thing I can say about this book is that it paints an interesting picture of the Third Reich. But that's where it stops. Clara Vine acts like a complete idiot and her blundering through the story made me want to gauge my eyes out, out of sheer frustration.

Great attention to detail throughout

I read book one of the trilogy initially Black Roses and found its historical attention to detail was excellent. The author really recreates the time and the historical aspects to a high standard. I thought the narrator was good and this aided the story. I found the character of Clara so dull she is possibly sleep inducing. She seems to go around everywhere contribute nothing to the discussions going on as she is 'listening' so that she can relay information back to her 'spy master' I don't understand why she is being invited to these parties as with her not talking and interacting it is difficult to understand her value or contribution.
If you are looking for a book with characters who develop during the book then I would suggest you reconsider this one. However if you want serious attention to detail surrounding all characters then this book may not be for you

Enjoyable but a bit drawn out

It was fascinating learning about the lead up to the war. The reference to real people and the wrapping of the fiction around the facts added a great dimension to the story. Unfortunately it blurred the suspense. Could do with a bit more about the characters, the murder and a little less description.

Snippets Of Wow Factor, Then Gone!

I enjoyed some of the book a great deal. Some was tortuous. The bride school was the setting that introduced the plot. The convenient death of the two young women, introduced the mystery. How did our heroine ever become a spy? Why did nothing happen to Mary? I felt that it was all too easy, in a regime that was already laying down foundations for the fear and horror that was to come. They really didn't see how dishevelled she was?!

The ending was insipid and happy ever after?

What does Julie Teal bring to the story that you wouldn’t experience if you had only read the book?

I felt that Julie Teal was perfect for the narration, though her American accent was weak.

Did The Winter Garden inspire you to do anything?

Yes, I wanted to set the record straight! Rewrite it! I know it was fiction, but it set itself up as more. I also believe that if you are setting your story around real people of historical stature, then those around them have to develop a reality. Even the genuine characters here, were cardboard.

I have read several fictional books set in Germany during the war, and in particular writing about the lives of the British intelligence living in Berlin at the time. It' is a period of history I find fascinating. Whilst I found this to be an interesting listen initially, it became rather dull and drawn out. I think it could have been written in half the time and achieved a better end result. I listened to it all but it did become rather a challenge towards the end.

Where does The Winter Garden rank among all the audiobooks you’ve listened to so far?

I thoroughly enjoyed this. I found the different perspective of Berlin interesting and the characters believable.

Fascinating insight into German life pre - war. Clara Vine is making a film with Germany's favourite pilot. Meanwhile her friend, American journalist Mary Harker, returns and investigates the death of an acquaintance of Clara at one of Hitler's Bride Schools. Intertwined with real life events, Clara must learn what she can to send back to London, whilst mixing with some of the German hierarchy. Great story read very well.

A history lesson instead of a novel

This book started with a prologue describing the murder at a Nazi bride school. I don't know if these really existed but I found it fascinating. The story then switches to half British, half German spy Clara. She is well connected and gets invited to parties with the Nazi elite. Sadly the two strands of the story (set in the same time period) just don't come together well and the bride school is hardly mentioned for hours of narration.I found the story advanced very slowly. I have 4 hours out of 14 left and nothing has happened yet. Part of the problem is the author's habit of including an all seeing narrator that fills in historical detail at every opportunity. For example, Clara walks down the street past Nazi flags, and there's an aside to tell you it was Nazi policy; she meets Ribbentrop at a party and there's an aside to tell you his background; or they discuss Ernst Rohm and the aside tells you he was homosexual and what this means in Nazi Germany. All this breaks up the flow of the story and means it's hard to get a sense of atmosphere. It's great if you know nothing about the history of the period but it is not the well paced, exciting thriller I was expecting.The narrator does an average job although her attempt at an American accent is a bit iffy.

Whilst undoubtedly well written and capably read this book has little to quicken the senses.
Derivative,bland and plodding - it tells a tale told many times before and far better - really left me cold.