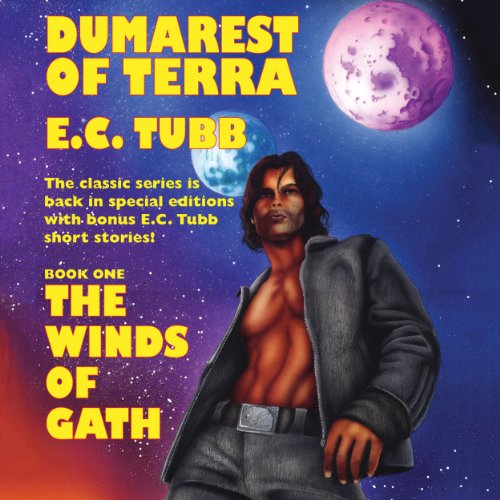 The Winds of Gath

The Winds of Gath

Mercenary. Galactic traveler. Survivor. Earl Dumarest is all those things - and more. For he claims to come from the mythical planet of Earth. And those claims have just attracted the attention of the sinister Cyclan. Stranded on Gath with no way off, Dumarest becomes embroiled in the schemes of a sadistic prince and a dying matriarch. Plots within plots unfold.

Dumarest is the key to their success. For amid the schemes of prince and matriarch alike, all have come to experience the legendary Winds of Gath. For when the star swarms come, when the music of the spheres rises over the the planet's valleys and mountains, the dead can speak to the living...and men go mad!

The Winds of Gath is the first volume in the Dumarest of Terra saga!

I read all these in the 70s and still have most of the paperbacks. Really classic theme of man searching for his long lost home world. Old style Sci Fi in the best sense of the term. They haven't dated as much as most of the work from this era. A little short, but a great listen

What did you love best about The Winds of Gath?

Rediscovering Dumarest of Terra is a delight beyond belief. This kick-off novel of a series of more than 20 novels, a legend in itself by a legendary author, was written in the mid-1950's, but (except for tape recording medium and lack of handheld communicators and worm holes) reads as if written last year.

Dumarest is my favorite character -- he is one searingly Hot Romantic Lead character. I had no idea how hot when I read this as a kid.

On the other hand, there are no overt sex scenes -- it's all implicit not explicit, and not even a "go to black" -- but if you have any imagination at all, this guy ROCKS.

Have you listened to any of Rish Outfield’s other performances before? How does this one compare?

This was my first Rish Outfield recording -- I have the second and third Dumarest of Terra novels which Rish Outfield also read, and I'm looking forward to them.

There's a spooky, paranormal/supernatural scene toward the end. Well, maybe it is and maybe it isn't, which is what's spooky, but the Winds of Gath blow and strange things are experienced -- judge for yourself. That's what I like best in a novel -- not pat answers but intriguing questions. Since there are more than 20 novels in this series, you'll get a better idea later on.

I also loved the Mystery element of "what is in that coffin, anyway?"

Even if you've read these books in text, the Audible recording is worth the time and money because it just brings the material to life with an excellent reader who understands the story.

I was particularly surprised by how many elements in this novel I had totally forgotten were Tubb inventions -- and having forgotten, I re-created some very similar elements in my own Sime~Gen Series novels (most of which are on Audible with more coming.) I would be delighted if Rish Outfield read a few of the Sime~Gen novels.

LIFE IS A LOTTERY

THE MAN WHO RIDES A TIGER, FINDS IT HARD TO DISMOUNT
Cruising the used book stores, I started coming upon these old series in paperback. I thought it might be cool to collect them. Like John Norman's Gor series. I picked up a couple of these with the half naked girls on the cover. I am finding out that there is a reason many of theses did not make it to hard back. They are bad writing. This is no exception. I found it to be very boring and Jim the Impatient will listen to NO boring book.

I do like George G. Gilman's Edge series (the most violent westerns ever printed). Maybe someday they will appear in audible.

This book doesn't even have a good cover, skip it.

What made the experience of listening to The Winds of Gath the most enjoyable?

The cover of the book left me a little hesitant at first. I imagined it would turn into a 'naughty' type of book, but luckily it didn't and the author's description was respectable and interesting of the planet Gath and its inhabitants. My favorite parts of the book was the different types of future technologies, even though you could find remedies of when it was written by such words like, 'tape' rather than 'data.' The way people travel in space is very thought out, with different levels of comforts to the extreme. The lower levels traveling, you have a higher chance of not surviving the trip. Traveling high, you would be rejuvenated and become younger. All and all the book was a very good and quick read. I actually wished it was longer! It left me wanting to read the next book, which I am going to do.

What does Rish Outfield bring to the story that you wouldn’t experience if you just read the book?

The narrator performed perfectly there was a few points that the audio recording equipment needed a little work such as mic volume needed to be adjusted.

If you liked, "Ender's Game," you would love this book.

Winds of Gath -- a space western?

What made the experience of listening to The Winds of Gath the most enjoyable?

Rish Outfield did an outstanding, highly professional job of reading. He was engaging and kept me on the edge of my seat. His talent helped me understand who was speaking at all times.

What other book might you compare The Winds of Gath to and why?

I had never heard of EC Tubb before listening to this audiobook, so I had no idea what to expect. Tubb envisioned Dumarest as living in a universe that is every bit as complex, developed and exotic as Herbert's universe of Dune. It is complete with intricate political systems, diverse worlds and peoples, elaborate trade and religious systems.

Dumarest, on the other hand, reminds me of a cowboy who stepped into this universe right out of a Louis L'Amour novel. He is tough, smart, loyal, and hardened. He has a way with women. He'll do the right thing or die trying. Rish does a fantastic interpretation of Dumarest's voice that really brings this character to life.

My favorite scene was the storm. Anyone who reads the book will know why. The story builds and builds until the storm, and then all hell breaks out. It's imaginative and haunting. Tubb does a great job of putting you in the mix. You can almost hear the voices in the wind...

On a distant world, sinister forces conspire to kidnap a princess, and only one man can stop them...