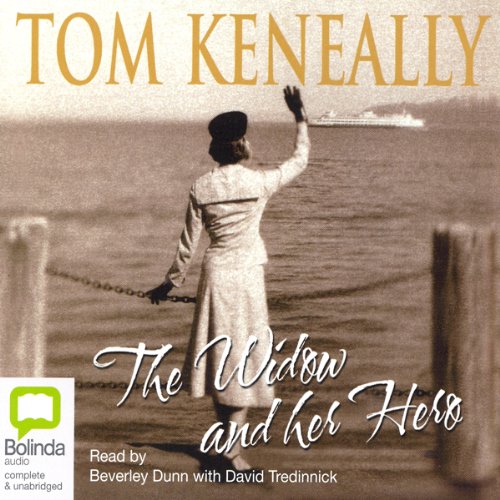 The Widow and Her Hero

When Grace married the genial and handsome Captain Leo Waterhouse in Australia in 1943, they were young, in love - and at war. Like many other young men and women, they were ready, willing and able to put the war effort first. They never seriously doubted that they would come through unscathed.

But Leo never returned from a commando mission masterminded by his own hero figure, an eccentric and charismatic man who inspired total loyalty from those under his command. The world moved on to new alliances, leaving Grace, like so many widows, to bear the pain of losing the love of her life and wonder what it had all been for.

Sixty years on, Grace is still haunted by the tragedy of her doomed hero when the real story of his ill-fated secret mission is at last unearthed. As new fragments of her hero's story emerge, Grace is forced to keep revising her picture of what happened to Leo and his fellow commandoes - until she learns about the final piece in the jigsaw, and the ultimate betrayal.

As absorbing as it is moving, this timely novel reminds us of the terrible costs of war as it questions why men so willingly and fatally adopt the heroic code.

What listeners say about The Widow and Her Hero

I downloaded the book for my mother in law, because the summary suggested the book is sort of 'n war love story. She was really disappointed, because she said the book is more about war statistics, like the names of ships and the names of officers and what they did during the war. She didn't finish the book and that seldom happens with her.

Very different from "Unbroken." You know from the start that it will end in disaster for the Australian commandos and it's very sad and difficult to listen to how events played out. The print version got great reviews, but for me this was just too tough a listen. The accent of the narrator seems completely British to my ear, which didn't seem to really fit the story.

Looks like not everyone's been terribly impressed by this one, but I really enjoyed it. I'm not entirely sure what folks were expecting, but having read another of Keneally's books (Victim of the Aurora), I knew I was probably in for a quiet and very convincing piece of historical fiction, and I wasn't disappointed one bit.

80-something-year-old Grace tells the story of her life with Leo, from courtship to marriage to widowhood, and of Leo's involvement with one Major Doucette and his obsession with dangerous missions to Singapore. It's a story of love and war and heroism and, maybe, about how the ghosts of your past can follow you for the rest of your life, if you let them.

As for the narration, Beverly Dunn, who was the voice of Grace, was fantastic--I absolutely loved her. I had a much more difficult time with David Tredinnick's narration for Leo's parts, because he just sounded so much older than I pictured Leo being at the time, and I could never quite reconcile the voice with the words. But there really aren't a whole lot of Leo bits, so it wasn't enough to really detract from the story as a whole.

Anyway, I definitely consider myself a fan of Keneally's at this point, and look forward to reading more of his work!

Based on a true episode

What did you love best about The Widow and Her Hero?

It was a insight to an episode in Australian War history from a woman's point of view.

What other book might you compare The Widow and Her Hero to and why?

Nancy Wake's story was a thriller as well.

What does Beverley Dunn and David Tredinnick bring to the story that you wouldn’t experience if you just read the book?

Beverley Dunn has a way with her involvment in the text. You feel that you are there with her.

At the end, Beverley was speaking slowly and drawing out every word.

I loved this audio book, well written, it gave Beverley Dunn and David Tredinnick a difficult task but a memorable one.

This is such a truly wonderful book.
Superbly narrated. One of those stories you don't want to end because you have enjoyed the journey so much.
The characters are so real. I would recommend this book to anyone with an interest in Australian history of our part in WW2.

The reader did a super job of pulling me into this story. She was perfect. I grew to really care about the characters and was left heartbroken thinking of all the great patriots they represent. David did a good job reading the part of "the hero" but it was short. I liked having 2 perspectives though. I highly recommend!

Interesting insight into a past era

Interesting insight into a past era. A nice Keneally book which kept me interested to the end

Such a beautiful story

Would you listen to The Widow and Her Hero again? Why?

Would definitely listen to this again. There are so many layers to the story once does not do it justice.

What was one of the most memorable moments of The Widow and Her Hero?

Memorable is the way The Widow copes with the disclosures of others about Leo's deeds. Leo is not the only hero.

What does Beverley Dunn and David Tredinnick bring to the story that you wouldn’t experience if you just read the book?

Beverley and David make the characters real and personable. It's like listening to your Grandma talk about your Granddad. The wistful way Beverley remembers her beautiful man and the anguish in her voice at not being able to touch him is palpable. David as Leo is truly what you would imagine a young man would sound like, as he describes his mates and their adventures.

If you could rename The Widow and Her Hero, what would you call it?

I couldn't rename it, it's just right.

Interesting, but the story never gets going

I love books that bring a different perspective to historical events, and this one about a young Australian war widow peeked my interest. I didn't know Australia fought in WWII. This book feels like a retelling of actual events, but it's not. It begins with Grace, the widow, describing what she finds out 40+ years later was how her husband died. It's an interesting way to start the story, the problem is since I know how it ends, it feels like the story never engages. I kept waiting for "the other thing" to emerge, but it never does. It really is about Grace's 40+ year reluctant journey to finding out what happened to her first husband.

This was a disappointing listen. The reader did her best in a story with little real depth which aimed, I imagine, for great depth but felt flat.