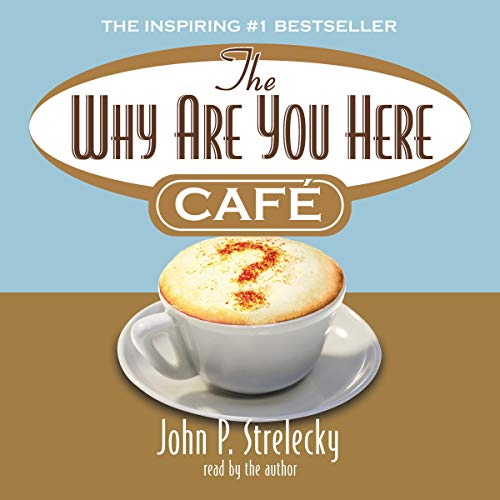 The Why Are You Here Cafe

The inspirational five time best seller of the year by John Strelecky. Now translated into 41 languages and read by over three million readers.

In a small cafe at a location so remote it sits in the middle of the middle of nowhere, John - a man in a hurry - is at a crossroads. Intent only on refueling before moving along on his road trip, he finds sustenance of an entirely different kind. In addition to the specials of the day, the cafe menu lists three questions all diners are encourage to consider.

Why are you here?

Do you fear death?

With this food for thought and the guidance of people he meets at the cafe, John embarks on a journey of self-discovery that takes him from the executive suites of the advertising world to the surf of Hawaii's coastline. Along the way he discovers a new way to look at life, himself, and just how much you can learn from a green sea turtle.

“Asks profound questions about the purpose of life and our role as individuals.” (Publishers Weekly)

”He (Strelecky) has put his finger on the pulse of the world.” (Gannett Media)

What listeners say about The Why Are You Here Cafe

Loved the simplicity of the story for very deep messages on personal growth & freedom to live fully.

A short sweet story that reminds you why you exist

We don’t ask this question often, but the truth is we are so insignificant under the cosmetic scale. Yet we exist. So why is it?

A must-read for everyone

Very helpful, especially if you are unfulfilled and/or at a crossroad in your career or life.