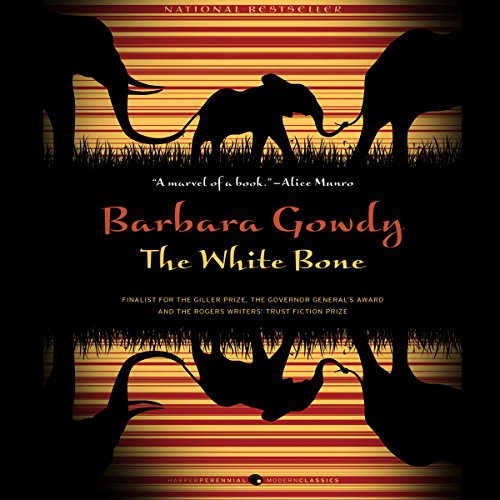 A thrilling journey into the minds of African elephants as they struggle to survive.

If, as many recent nonfiction best sellers have revealed, animals possess emotions and awareness, they must also have stories. In The White Bone, a novel imagined entirely from the perspective of African elephants, Barbara Gowdy creates a world whole and separate that yet illuminates our own.

For years, young Mud and her family have roamed the high grasses, swamps, and deserts of the sub-Sahara. Now the earth is scorched by drought, and the mutilated bodies of family and friends lie scattered on the ground, shot down by ivory hunters. Nothing - not the once familiar terrain, or the age-old rhythms of life, or even memory itself - seems reliable anymore. Yet a slim prophecy of hope is passed on from water hole to water hole: the sacred white bone of legend will point the elephants toward the Safe Place. And so begins a quest through Africa's vast and perilous plains - until at last the survivors face a decisive trial of loyalty and courage.

In The White Bone, Barbara Gowdy performs a feat of imagination virtually unparalleled in modern fiction. Plunged into an alien landscape, we orient ourselves in elephant time, elephant space, elephant consciousness, and begin to feel, as Gowdy puts it, "what it would be like to be that big and gentle, to be that imperiled, and to have that prodigious memory".

What listeners say about The White Bone

If you love Watership Down then you will love this beautifully written and well preformed book. I listened twice, back to back because I loved it so much.

I wanted to like this book. I really did. But the writing style is just terrible, and the plot goes absolutely nowhere, then abruptly stops as though if the writer just ran out of pages.

To compound the issues with plot and style are the characters--exactly one character (a calf named Date Bed) in the entire book is likeable. The others are either paper-thin caricatures, unpleasant, or off-putting in some other way. The worst probably being a bull that we are clearly intended to like, but who only comes across as a creepy pedophile. (Not hyperbole--considerable page space is given to the hard-on he got from the scent of a young calf.

The whole affair is a tedious, pointless slog.

If you want good fiction with a non-human protagonist and an environmental message, pass this up and get The Bees.