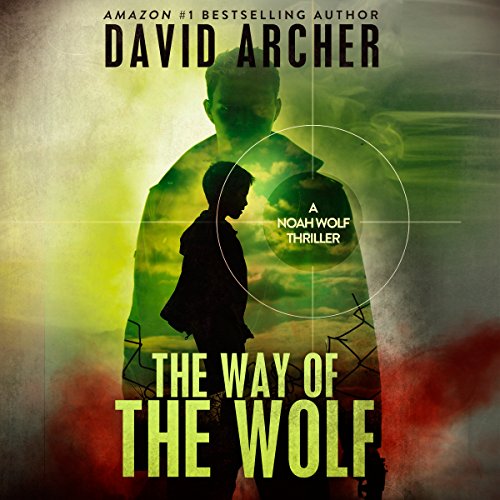 The Way of the Wolf

The Way of the Wolf

David Archer is back with a vengeance with his newest hero, Noah Wolf. After fans raved about his debut series, The Sam Prichard novels, Archer now is about to back even harder. People are already throwing out names like Mitch Rapp and Alex Cross, but don't take my word for it. See what all the fuss is about before Archer becomes a household name!

What happens to a seven-year-old boy who sees his parents die in a murder suicide? There is trauma, of course, and an impact to his emotional health from which you may never recover. Noah Foster was that boy, and his struggle with post-traumatic stress has left him without emotions, without a conscience and without whatever it is that once made him human. The only thing he's got now is his friends, and with their help and guidance, Noah will learn how to disguise himself, how to hide his wolf-like nature in the clothing of the man he will grow to become. But one can only pretend for so long, and eventually even Noah isn't able to keep the Wolf at bay.

The Way of the Wolf covers from the time his parents died as the result of murder suicide when he was age 7 until he was age 19. Author David Archer calls the novella Book 0 of the Noah Wolf series; however, Audible currently lists it as Book 4. This novella is strictly informational background on Noah; as such it is not a suspense mystery or thriller. However, for fans of David Archer's Noah Wolf series, this book is of great background material in understanding what makes this rather unique protagonist tick. As usual narrator Adam Verner does a great job.

laughed myself sick and was bored to tears

HE DOES NOT HAVE VIOLENCE WITHIN HIS SOUL. HE DOES NOT BELIEVE HE EVEN HAS A SOUL UNLESS IT WAS ONE INTENDED FOR A WOLF. I REGRETTT
Adam Verner did good, I suppose, but-
at one point I thought, maybe this is supposed to be all subversive and halfway through we'll go
"oh, he comes off as a delusional idiot because he actually IS a crazy person, how clever."
Is that it? Is that it?? no it is not
I thought maybe it's the first person POV or the child POV messing with my head but no. it is not that either. this is just really bad. do not. do NOT buy this I beg you. listen to your heart. listen to me. you know better. don't do this to yourself.
it starts off like a really bad humblebragging self-insert fanfiction and from then on it just goes from hilariously bad to sad bad to mindnumbingly BOOORING with some complete nonsense sprinkled on top.
at one point a character literally says "HOLY COW MAN SHE A HAWT"
at another point I though, ok. maybe I was just overreacting. this is starting to become moderately decent and then he said: "and that's it" and that was it.
don't waste your money on this p l e a s e

(i still bought the actual first book, this one being a prequel, because it's not in first person and doesn't have a child POV. It's that one I had looked at and then made the mistake of buying this one instead. BUT THEN I RETURNED IT BECAUSE IT IS JUST AS BAD BUT WITH SOME MORE MISOGYNY SPRINKLED IN that usually goes completely over my head but this time it was so one the nose it had me cringing into a small ball it's baaad)

PS: I just saw the editors compare this dumbass to Mitch Rapp and Alex Cross and how dare you-

I haven't read any of the other novels about Noah, so I wasn't indeared (sp?) to the character and the story was kind of boring.

Don't begin the Wolf Series with this one

I made the mistake of beginning the Wolf Series with this book......more info than I needed to know before establishing whether or not to continue with the Series.

Way of the wolf

As a Mitch rapp fan I'm hungry for more, needs to be longer and a series.

Interesting story, well told. Reader is a bit too expressive in blunt areas, makes it sound fake, but that does match the story.

I really enjoyed listening to this book and can't wait to continue with the next part.

This was my first introduction to the noah wolf series. I listen to over a book a week in the spy/thriller categories on audible. I thought the plot was interesting, the writing ok. I’d. Like to try more in the series. But to pay regular prices for a three hour book really is disappointing. Most of the audible books I buy are 14-18 hours read. It is a pleasure to listen for a few hours in the evening. David- you should charge less or combine books on audible.

This was $15 and 3 hours of my life that I'll never get back. Do not make the same mistake