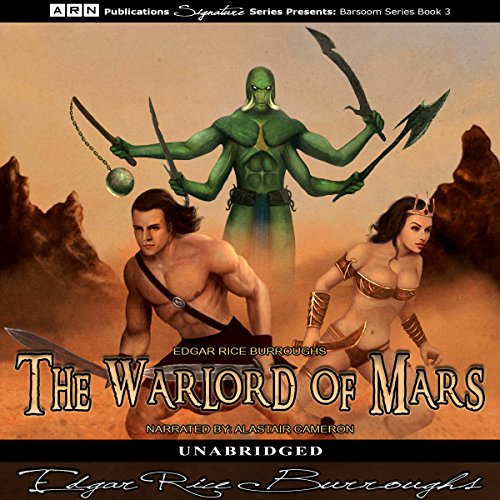 The Warlord of Mars

Edgar Rice Burroughs' The Warlord of Mars is the third novel in his science-fiction series set on the planet Mars. In the second book, John Carter's wife is taken prisoner by the fake god Issus in the Temple of the Sun. The temple's prisoners are kept in cells that slowly rotate so that the cell is only accessible to the outside world once a year. And thus, in this third novel, John Carter must wait an entire year before he can free his beloved Dejah Thoris.

In the meantime, Carter is surrounded by more politics and the battles of the different fractions for power. The white Martians and the black Martians both have new leaders and are yet again at war with one another over religion, land, and power. The Therns are the race who want to keep the old religion alive and their leader, Hekkador Matai Shang, seeks to help John Carter free his wife because Shang's own daughter is also imprisoned in the Temple of the Sun.

Together, the two warlords stumble upon Thurid, an ancient Martian who knows the secrets of the Temple of the Sun. Sadly, Thurid betrays Carter when he talks Shang into taking not only his daughter, but also Carter's wife away from the temple; while leaving Carter behind. Determined to reunite with his wife, Carter sets chase after Shang to free her.

What listeners say about The Warlord of Mars