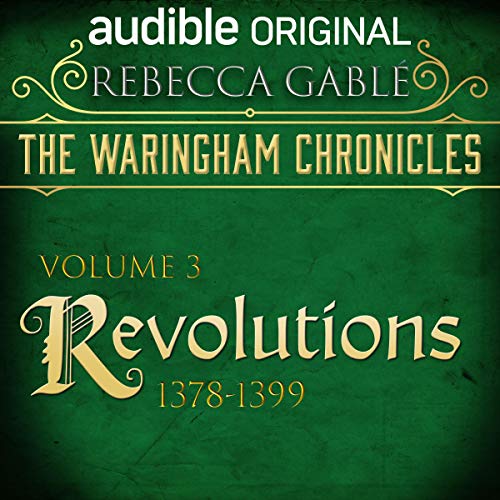 “If you enjoyed the epic historical fiction drama Scarlet City, you’ll love returning to that world for The Waringham Chronicles - an ambitious six volume series set against an ever changing backdrop of war, plague, revolution and political intrigue. Narrated by the always exceptional Miriam Margolyes and performed by a full cast. You’ll be hooked!” (Mariele, Audible Editor)

“Miriam Margolyes returns to Audible in spectacular fashion as she takes on six epic adventures, guiding us through the drama of The Waringham Chronicles supported by a fantastic cast who fully embrace these fantastic stories.” (Matthew, Audible Editor)

At the age of 30, Robin is an Earl at last - but not the Earl of Waringham, the ancestral title that he still hopes to win back one day from the evil Mortimer.

England has seen other changes too: Edward III is dead and his successor, the boy king Richard II, is at odds with his uncle, the Duke of Lancaster. The introduction of a hated new poll tax brings about one of the most dangerous episodes in English history and Robin finds himself embroiled in the Peasants’ Revolt.

As the years pass, his old enemies continue to move against him and with the stability of England under increasing threat from an unpredictable and incompetent King, Robin finally joins forces with Lancaster and his son, Henry, in a revolution which aims to secure the nation’s future. And as he finds himself helplessly in love with the wife of his oldest and most implacable enemy, the stage is set for Robin’s final showdown with Mortimer.

In the third instalment of a six-part epic, Medieval Europe is brought to life in a multi-cast drama based on the novels by Rebecca Gable, author of the Scarlet City trilogy.

What listeners say about The Waringham Chronicles, Volume 3: Revolutions

Have enjoyed every minute of the Waringham Chronicles. Takes my mind off the terrible things going on in our world today. The cast is superb. Can’t wait until November for next book. My family ancestry can be traced back to the Plantagenets of English royalty so I am mesmerized.

In my most favorite book (all volumes) category

I love that the author has stayed true to the history. I love how the characters are so vivid and alive. The whole production is awesome. It could easily be a movie. Though I enjoy the audible book and the actors and narrators. They are exceptional. It brought this history of the Black Prince, King Richard II, John Guant and King Henry IV (Bolingbroke) to where you feel you are right there. This is an exceptional book. Also I am very appreciative that she has brought the women of the times into the story!!! Will and have recommended this book.

The second chapter is actually the first chapter, not sure which chapter position the first one should be in

I am enjoying this series and had preordered and waited for this volume so it was rather disappointing to receive a spoiler at the beginning. If, like me, you have never been a person who skips ahead or reads the ending first make sure you forward onto the true beginning

I have listened to chapter one. It is out of sequence. Chapter two commences the beginning of volume 3.

Awesome. Thoroughly enjoyed this one. Could not put my headphones down. Can’t wait for the next instalment

Against a highly accurate historical background we continue to follow Robin of Waringham through the tempestuous times of the 14th Century. Excellent narration and dramatic performances support this exciting story. A great listen!

Chapter 1 should be at the end of part 1

A great story as per the first two, but I also have to point out that in part 1 the first chapter should be the last one, as several reviews have already mentioned. Hopefully somebody can tweak this for future purchasers. If not and chapter 1 starts off "Robin had completely lost track of the days" skip to chapter 2 and come back to chapter 1 at the end of part 1.

Great narrator and performance by the cast.

Have listened to previous books and this one continues the story seamlessly. Enjoyable and easy listening while out walking, doing chores, dozing off to sleep etc.

yet another quality installment of the Warringham Chronicles, fabulous insight of British History, First Class.

Superb, brilliant have we really got to wait so long for the next installment, it gets more exciting every book, just how much more nail biting is there going to be, lot's I hope😊👍

I’m completely caught up in this entrancing series of books, loving the acting and, especially, the wonderful narration from Miriam Margolyes.
Being a fan of historical novels anyway, I was prepared to like the story, but the detail and pace seems very well judged..plenty of facts and dates and battles, but lots of characters and interesting insights into life in the period, brought fully to life by the acting, special effects and the background music..
I’m now really looking forward to the next in the series!