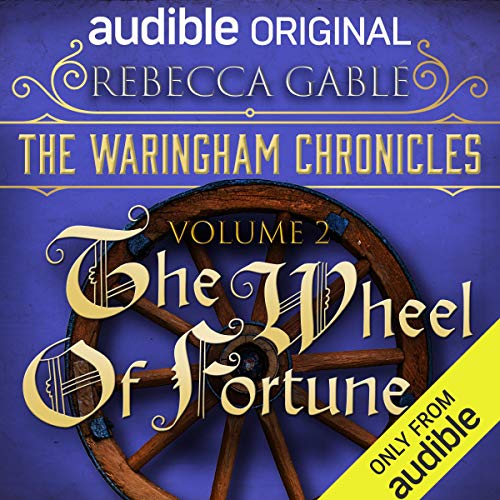 The Waringham Chronicles, Volume 2: The Wheel of Fortune

The Waringham Chronicles, Volume 2: The Wheel of Fortune

“If you enjoyed the epic historical fiction drama Scarlet City, you’ll love returning to that world for The Waringham Chronicles - an ambitious six volume series set against an ever changing backdrop of war, plague, revolution and political intrigue. Narrated by the always exceptional Miriam Margolyes and performed by a full cast. You’ll be hooked!” (Mariele, Audible Editor)

“Miriam Margolyes returns to Audible in spectacular fashion as she takes on six epic adventures, guiding us through the drama of The Waringham Chronicles supported by a fantastic cast who fully embrace these fantastic stories.” (Matthew, Audible Editor)

Robin has made a powerful ally in the Duke of Lancaster. But he has made powerful enemies too: not only his childhood adversary Mortimer, but the sadistic knight Peter de Gray. Returning to England, he is awarded the fiefdom of Fernbrook in Lancashire, where he meets the beautiful noblewoman Joanna.

But the wheel of fortune keeps turning and as the years pass Robin and his friends must face trials and tragedies: plague, war and political intrigue are never far away. And when Fernbrook falls into the covetous hands of the irredeemably wicked young Earl of Burton, Robin must confront horrors at home which rival even the bloodshed he has experienced in the ongoing wars against France....

In the second instalment of a six-part epic, Medieval Europe is brought to life in a multi-cast drama based on the novels by Rebecca Gable, author of the Scarlet City trilogy.

Well I am so into this series. Should have lived back them can’t believe we have to wait until May for next one. Love hearing the different voices.

I was completely absorbed.

I couldn't stop listening and now I'm impatient for the release of the third book. Excellent performances all round and completely to my taste. I've been transported to another time.

I even got used to the background music which to be honest I found slightly irritating in the first book although I understand it's purpose in creating an atmosphere.

Another great book fantastic gripping tail from a time we all wonder about in english history. A definate listen the characters come alive

fantastic listen, draws you in , can't wait for the next installment, super cast .

loved the story and the characters. I look forward to no 3 in the trilogy