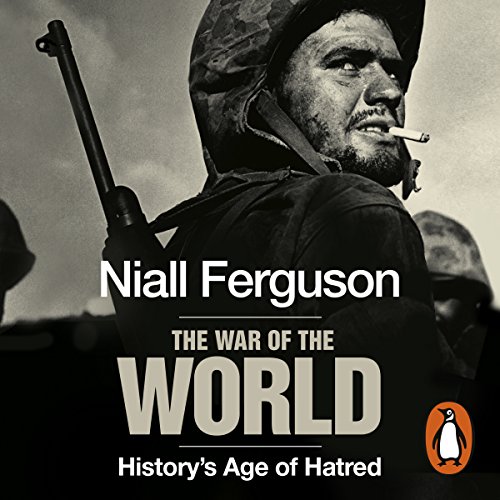 The War of the World

The War of the World

Penguin presents the unabridged edition of The War of the World by Niall Ferguson, read by Saul Reichlin.

The world at the beginning of the 20th century seemed for most of its inhabitants stable and relatively benign. Globalising, booming economies married to technological breakthroughs seemed to promise a better world for most people.

Instead the 20th century proved to be overwhelmingly the most violent, frightening and brutalised in history, with fanatical, often genocidal warfare engulfing most societies between the outbreak of the First World War and the end of the Cold War.

What went wrong? How did we do this to ourselves? The War of the World comes up with compelling, fascinating answers. It is Niall Ferguson's masterpiece.

"A heartbreaking, serious and thoughtful survey of human evil that is utterly fascinating and dramatic." (Simon Sebag Montefiore, The New York Times)
"Unputdownable, controversial, compelling." ( The Independent on Sunday)
"The grenade lobbed into the cosy tea party of received wisdom." (Max Hastings)

Niall Ferguson certainly has a way of altering your perception of the world's history and as a result; altering the way we see today's world. This book definitely has that effect on me. Whilst staying true to statistical analysis and professional historiography, Ferguson has also written this book in an extremely gruelling, emotional and dramatic flair which captivated me. The very fact he can switch to pop-culture references/light humour to disturbing and very graphic content is also seem less and appropriate. Bloody good book.

Best book about WWI and WWII and everything after.

A brilliant book which gives an insight into the history leading to the wars and also how the wars shaped our world long after they were supposedly over. A must read (or listen).

a very interesting and evocative look at human behavior. unpleasant and brutal in many ways but looks of new insights

Okay, but Ferguson has done better

I felt a bit misinformed by the description as I believed that the book would likely have more coverage of the cold war, the vast majority of this book covers the period pre-1950. Additionally Ferguson choice to focus on the psycho-sexual dimension of the world wars.
I would recommend this book for those who already have some knowledge of the period without as it does have some insight that isn't in all books of its subject.

there were times i had to stop disgusted with the depravity of mans inhumanity to man. Niall tells it like it was and pulls no punches and it is at times harrowing particularly genocide bits. Every child should study this book in school compulsory reading if ppl understood the primitive motives we all have and how dehumanising ppl can lead to bloodshed the world might be a better place at the expense of some nightmares after listening to this. i wish niall had naratted this book though it can be a bit flat narration at times.

a worthwhile investment that will foster a deeper understanding of 20th century conflict. Up there with Ferguson's finest work.

At 34 and a half hours, this book requires commitment but it will be amply rewarded through the author's forensic analysis of the major conflicts of the 20th century. Appropriately, emphasis is given to the World Wars however the perspectives of both causes and issues are examined in ways not found in many other books on the subject.

The narrator's tone and speed gave gravitas to the subject matter but was never condescending or overplayed.

I highly recommend this book to anyone interested in a serious examination of history's bloodiest century.

Important to look unflinchingly at the events of the 20th century but listening to the book likely isn't going to make you feel great. I like the recent history of the era and there were a few topics I hadn't heard much about before.

A probe into humanity's madness

A thorough perspective of WHY things had happened the way they were.
Excellent preview of events leading to WW1 n WW2.
A must-listen for history enthusiasts and humanitarians alike.

Just another history of WW2

Scholarly and well written, but ultimately just a rehash of the same old WW2 stuff historians have been churning out for decades.

I had a good time listening to the book but mostly due to the near perfect narrator. The book itself is well written but in my opinion the analytical insight and revelation it promises in the introduction is missing later on, giving the reader a feeling of dissapointment. It is merley a new rewriting/description of events surrounding the wars of the XX and XXI centuries, rather then an in depth analysis of those events from a novel perspective.

Excellent book. Insightful but not hysterical.

I loved the book but the reader was very irritating. I speeded the delivery to 1.25* and that actually helped a lot.

A fascinating book which is deals with very difficult subject matter such as genocide and the holocaust. A must read for anyone who wants to learn about the human cost instead of the glamorous side of war

Although a fan of both non fiction and Niall Ferguson I simply could finish this work. With a book so fact and statistic heavy, the presenter has their work cut out to keep the listener engaged, but in this case they, at least for me, failed as it was simply too monotone and boring.
I also could not go along with a premise that all conflict is racially motivated when so many of the examples used seemed, at least to me, to be more about culture and religion rather than race.
A pity, it is the first book by the author that I simply have not been impressed by and incidentally the first audio book I have given up on.

Dr Ferguson never lets you down. This should be required reading for every modern history student. Its logical, challenging and sets aside much of what you consider as fact. Get it, and free your attitudes to conflict in this century.

A refreshing look at familiar areas of history.

Ferguson has an uncanny ability to gore sacred cows without seeming disrespectful. Reichlin's reading lends an emphasis and drama to the text arguably necessary for such weighty material in an audiobook.

Thoroughly enjoyable for those already familar with twentieth century history.

what an amazing detailed insight into the last century of warfare. very informative. an eye-opener.