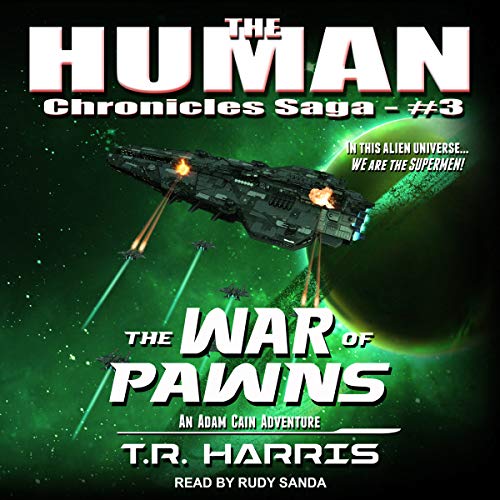 The War of Pawns

The War of Pawns

In the third book of The Human Chronicles Saga, ex-Navy SEAL Adam Cain - a human lost in a galaxy of deadly alien empires - fights desperately to return to Earth, only to find that his homecoming is anything but warm.

In the aftermath of a devastating attack on the Earth, Adam learns that the humans have been played for fools by the evil Klin race. Now he has two enemies to fight: the Juireans and the Klin. Yet as before, the aliens don't realize what trouble they're in. Now they're up against an entire planet of human supermen! Pity their weak and fragile bodies. Adam Cain - as well as the entire human race - is out for revenge!

This epic space opera saga is reminiscent of the Golden Age of Science Fiction, full of exotic aliens, fantastic space battles, galactic empires, and a goal as large as the human spirit. Fans of science-fiction space opera and military science-fiction have raved about the series, which includes 23 books with more to come.

Fast-paced and humorous, The War of Pawns will have you laughing and fist-pumping all the way through. This is a story of scope and adventure.

What listeners say about The War of Pawns

I liked reading this series a while back. It's fun sci-fi junk food. That being said, I feel like the narrator purposefully chose voices unfit for the characters he was portraying. Adam Cain started sounding like someone mocking a surfer dude in this installment. The love interest has a voice designed to infuriate southerners, and most military characters speak like cartoon cavemen. I will not be purchasing the rest of this series.

The narrator felt it necessary to completely change how some characters sound, including the two most important human characters. I don't understand why, but it really pulled me out of the story for awhile after getting used to them in the previous two books. This should absolutely never be done in the middle of a series. Overall a solid story, but people should be prepared for this change.

The narrator may be the same for all the books, but he completely changed several of his voices in this book compared to the first two, and it’s not good.