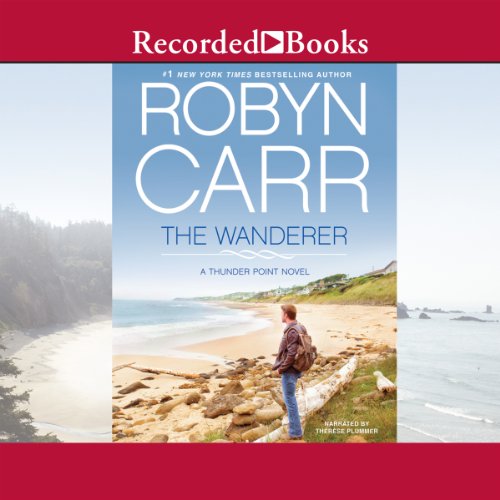 Nestled on the Oregon coast is a small town of rocky beaches and rugged charm. Locals love the land’s unspoiled beauty. Developers see it as a potential gold mine. When newcomer Hank Cooper learns he’s been left an old friend’s entire beachfront property, he finds himself with a community’s destiny in his hands. Cooper has never been a man to settle in one place, and Thunder Point was supposed to be just another quick stop. But Cooper finds himself getting involved with the town. And with Sarah Dupre, a woman as complicated as she is beautiful. With the whole town watching for his next move, Cooper has to choose between his old life and a place full of new possibilities. A place that just might be home.

What listeners say about The Wanderer

The Wander was a gentle novel. There was no violence in the true sense of the word. The characters all went well together. The novel was a relief from abhorrent violence. The novel was an easy listen. Good for the beach. Romance novels aren't my genre but since I've listened to this one, when I need a break from an edgy novel, I just may try another one.I would have to say what I liked least was the narration. The voices were not distinct enough to separate the characters. The narrator was not very good doing male voices. Although, in truth, it wasn't so awful that I was able to finish the book.

The ending was predictable.

Who would you have cast as narrator instead of Therese Plummer?

Actually, the list of narrator's that I have compiled as my favorites do not include any females. I'll have to rectify that error.

Irresistible I think may be too strong a word. It was an easy read that was gentle as a summer breeze.

Sit back and relax if you need to listen to a nice and smooth novel. There is nothing that made me want to finish it all in one day. In fact, I rather enjoyed the slow and steady pace. The character's are well developed but they don't have any real depth. The story line stays true to form from beginning to end. I only paid $7.95 for the novel and I'd say for that price it was not spectacular but okay.

Robyn Carr has spoiled me. I have loved every book I have read by her. I am in love with her Virgin River series. And was putting of this series because well I wanted to save it… But I couldn’t resist and I needed my fix.

This is NOT Virgin River and that’s OK. :) I fell in love with Thunder Point who could blame me. This place is special they look out for one another. They come together when they need to. It’s just as special as VR.

I love the high school kid’s part of this book. We get the adults but we get the teens too and that was great. Ooooh and the older adults too!!! I loved that. Put a smile on my face to see how much a man can love all parts of a woman, even her insecurity’s.

Ahhhh Cooper, finally is all I am going to say about Cooper. ;)

Yahoooooooo Therese Plummer was the narrator!! If you haven’t had the pleasure of listening to her you MUST. She is outstanding. She brings every book I have ever listened to her by to life in a way no other narrator has done for me. She does a fantastic job.

Has potential but disappointing...

The characters were interesting but there were too many of them. Given the length of the book versus the wide cast of characters, every story line was shallow. Several characters also meant several backstories. It was frustrating because their past and present lives were interesting, but you didn't get enough of each story. I was drawn in by the initial mystery at the beginning of the book, but attention was not brought back to it until close to the end. In between there are multiple love stories and stories in general.

What could Robyn Carr have done to make this a more enjoyable book for you?

It would have been nice to have a little more suspense and deeper story lines.

Have you listened to any of Therese Plummer’s other performances before? How does this one compare?

This is my first time listening to Therese Plummer. I thought she did an outstanding job considering she was the voice of so many characters.

Did The Wanderer inspire you to do anything?

I was not inspired at all. It was just an interesting story.

The summary of this book is misleading. I was looking forward to the story of Cooper and Sarah, but this book closely follows the lives of many other people in town. It may be good for the summary to include that.

I enjoy this new series. Other reviews have it correct that because she introduces so many characters it can occasionally be tough to follow along. A narrator with more vocal characterization range would have helped with that. I think the people are interesting and I'll look forward to more books in this series.

This light romance was just right-right length, right reader, right story line and right amount of sappyness to pull me and make me like the characters.

This isn't much of a mystery but it is a romantic, coming of age book. Both teenagers and middle age characters are coming of age. I would not of bought this book if I had realized it. I live in Oregon and it was fun to hear about locations just down the road.

I Love the World of Thunder Point! It's a Hit w/me

I have become a fan of Robin Carr. If you liked the Virgin River series you will like the world of Thunder Point too. Carr has a way of mixing romance and a great story and I have come to expect this from her novels. This one is no exception, the wright amount of character development and hot steamy romance to make me wish the next installment was already available for download. Therese Plummer shines as the narrator and made this audio come to life. She is really great with the male and female voices. Sometimes a narrator can kill a good story, Plummer just adds to this one. In my opinion Carr and Plummer are a great match. I promise you will love hearing about Sarah and Cooper who are the main characters. Then there are several side supporting characters with equally blooming romances. I just can't say enough I loved this one.

Robyn Carr does it again!

Would you listen to The Wanderer again? Why?

Yes definitely! Robyn Carr and Therese Plummer are the perfect combination. Robyn Carr's books capture you from the start.

The love the character relationships. I found myself laughing out loud and getting strange looks from my children : )

Therese Plummer is one of my favorite narrators. She has the ability to bring a real voice to every character. I find myself getting lost in the voices she gives and she makes them believable.

I don't think there was a particular moment. The whole story line moved me.

I had to return this series. I'm offended where I hear bad language used. So I'm uncomfortable listening to them. We have such a vast, language so use it and foul words won't be needed!

FANTASTIC!!! MY FAVORITE WRITER AND NARRATOR!!!!!

Would you listen to The Wanderer again? Why?

Definately! Robyn Carr is my favorite writter from Virgin River to this. All are fantastic. The narrator is ABSOLUTELY THE BEST THAT I HAVE EVER HEARD! Makes you feel that you are right there! Her voices are just the best. I listen to audiobook all the time (yes I mean about 12 hrs per day) and love to hear Therese Plummer! So glad she and Robyn Carr teamed up! Keep up the GREAT work!

When Gina told Mac he was an idiot!

Definately for sure! Stayed up until 2 am just to get thru the first downloaded part! LOL

LOVE, LOVE, LOVE ANYTHING BY ROBYN CARR AND TERESE PLUMMER!!!!