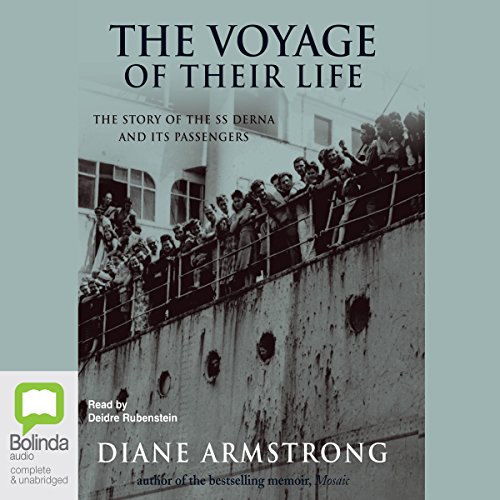 The Voyage of Their Lives

This audiobook from Diane Armstrong isn't a memoir in the singular tradition of most memoirs. It is a memoir of a community, the inspiring and heartrending tale of those aboard the Derna in 1948. With little certainty of success, hundreds crammed themselves onto the ship leaving behind a world of Nazi reign, death camps, and gulags in hopes of a new start in Australia and New Zealand. Performed with a sincere empathy from veteran narrator, Deidre Rubenstein, The Voyage of Their Lives: The Story of the SS Derna and Its Passengers is an incredible look back at some of the lives that were forever changed from one of the darkest periods in modern European history.

In August 1948, 545 passengers boarded an overcrowded, clapped-out vessel in Marseilles to face an uncertain future in Australia and New Zealand. They came from displaced persons camps in Germany, death camps in Poland, labour camps in Hungary, gulags in Siberia, and stony Agean islands. There were those who had been hunted by the Nazis and those who had welcomed them; those who had followed the Communists and those who had fled them.

Diane Armstrong set sail on the Derna with her parents when she was 9 years old. Like a detective searching for clues, she has located over a hundred of the passengers. Through their recollections and memorabilia, as well as archival documents, she has recreated the voyage and traced what became of their hopes and dreams. The result is the unique portrayal of a migrant ship and its passengers.

"Deidre Rubenstein's energetic reading keeps [the story] moving. She gives each word its due and enlivens conversations and life stories, many of them harrowing." (AudioFile)

What listeners say about The Voyage of Their Lives

Could have been magnificent; still pretty good

The author must have run short of material. The first half of this book is beyond excellent, recounting the personal background and experiences of a group of War refugees who, in 1948, were emmigrating from various parts of Europe to Australia. Parts are especially interesting because the author, as a child, was one of the passengers herself, as we her own parents. Many scenes are memorable, eg,on Yom Kippur, services were held for the Jews. Her parents, for reasons of survival, had hid their Jewishness and because there was a Jewish quota, were traveling as non-Jews. The tension over the question of whether they should reveal themselves so they could observe the day is just one of the tiny points in this book that make it so interesting. Today, it's easy to forget all the "little" rules that existed at the time -- such as the Derma's 25% limit on Jewish passenbers.

All of the stories of the passengers on the voyage, the tensions among the several Germans -- some of them former Nazis -- and the surviving Jews; how a group of refugee children fared; the stress of the terribly overcrowed conditions, lost luggage, poor food, lack of water, all make it an engrossing 'how it was' book, and supremely interesting and worthwhile.

Unfortunately, a little over half through, the author apparently ran out of material and decided to fill in with contemporary accounts of what several former passengers are doing now. At this point, it becomes a tedious recital of success after success. Nice that they all did so well, but the endless accolades get seriously boring. She even goes so far as to quote the verbatim language on a placque of recognition one of the men had received from his community. Yikes!

Again, how wonderful he did so well. But it's too bad this is an audiobook, and you can't skip over it very easily, as you would in a regular book.

It's still worth listening to -- the narrator is good, and the book is a valuable contribution to existing knowledge.

An enlightening account of holocaust survivors trying to start a new life. It is amazing how they overcame the difficulties to be accepted into Australian society. Definitely worth the read.

What did you love best about The Voyage of Their Lives?

The Voyage of Their Lives gives a compassionate view of refugees from the aftermath of WWII board an unseaworthy ship bound for Australia to rebuild their lives and futures in that far-off land. We hear personal and poignant stories of individuals we come to admire for their resilience after unimaginable suffering as we see them struggle to rebuild their lives.