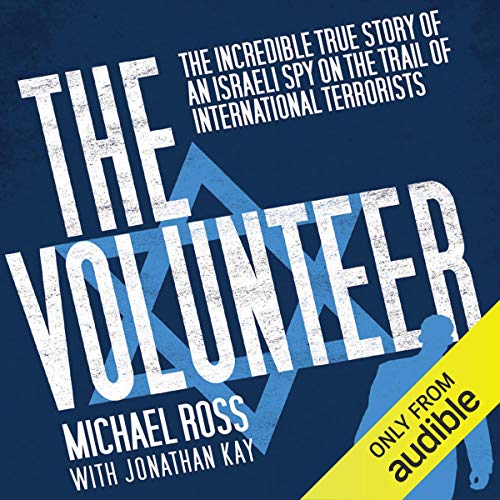 In 1982, when Michael Ross was a 21-year old Canadian Anglican, he visited Israel. Soon he had converted to Judaism, married an Israeli woman, served in the Israeli army, and joined the Mossad, Israel’s nerve center for counterterrorism, covert operations, and intelligence gathering. Over the next 20 years Ross lived the classic double life: family man and spy. The Volunteer is his memoir.

Performed briskly and with precision by Walter Dixon, The Volunteer seeks to introduce the listener to the life of a particular spy, and to situate Israel in the larger geopolitical context. Ross is a man whose dangerous life and career are the products of a love for a land that is not obviously his own, and his ideological defense of Israel is made clear.

In 1982, a 20-something named Michael Ross left home to backpack across Europe. Little did he know that his vacation would set in motion a chain of events that would hurl him into a career where the bosses are seasoned spies, and the work is tracking the world’s most dangerous terrorists. The Volunteer is a fast-paced memoir that provides insight into our world, both pre- and post-9/11, told by a man on the front lines in the war against terror.

What listeners say about The Volunteer

Enjoyed this Espionage from another country!!

If you could sum up The Volunteer in three words, what would they be?

The well-written, continually interesting story of an Anglican who, much to his surprise following a vacation after serving in the Canadian military, found himself with an Israeli wife and ultimate career as a Mossad agent. Ignore the nonsensical, slanted, propagandistic Publishers Weekly review associated with the book's listing.

Joyed this so much more than I thought I would. But it on the Lord and could not stop listening. It was a wonderful and fascinating story ---very much worth a listen.

Inside the Life of a Spy

If you could sum up The Volunteer in three words, what would they be?

What other book might you compare The Volunteer to and why?

A novel by Alan Furst-- but this is a memoir.

The narrator is intelligent-- he understands what he is reading, which is not always the case.