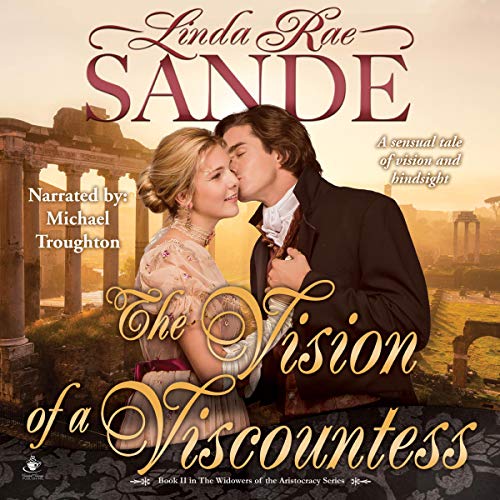 The Vision of a Viscountess

Love looks with the mind, but not with the eye...which explains Cupid’s success.

When Baron Jasper Henley is caught kissing a marquess’ niece in the gardens during a ball, he agrees to marry the girl. It’s not the first time he’s been forced to marry - he and his late wife had been caught kissing in front of the same fountain prior to his marriage proposal - but he had always intended to marry Sophie.

While on a visit to London to visit her uncle and his new wife, Marianne Slater is happy to attend the Season’s entertainments - even if she can’t see very well. The world is a blur unless it’s close-up. Usually a wallflower at balls, Marianne is stunned when a gentleman approaches and offers to escort her in the gardens. A clear-eyed, innocent kiss suddenly results in the blurry whirlwind of a quick wedding and its subsequent aftermath.

Determined to show his new bride the wonders of the ancient world as part of his next archaeological expedition - their wedding trip - Jasper will do whatever it takes to see to it Marianne can see more clearly. But as things come into focus for her, Jasper may find his own vision clouded by an unexpected revelation.

Can the insights he discovers from bits of history open his eyes to future possibilities?

He may prefer blindness in The Vision of a Viscountess.

What listeners say about The Vision of a Viscountess