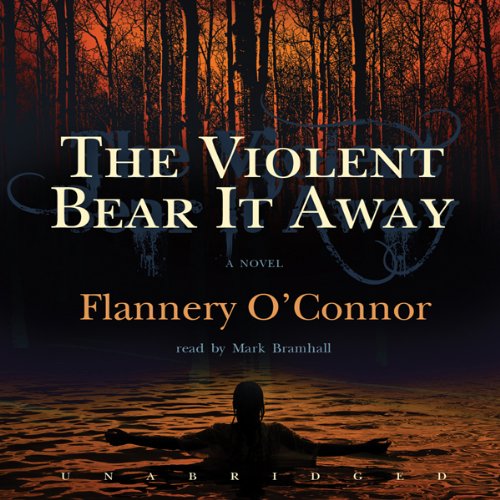 The Violent Bear It Away

First published in 1960, The Violent Bear It Away is now a landmark in American literature. It is a dark and absorbing example of the gothic sensibility and bracing satirical voice that are united in Flannery O'Conner's work. In it, the orphaned Francis Marion Tarwater and his cousin, Rayber, defy the prophecy of their dead uncle - that Tarwater will become a prophet and will baptize Rayber's young son, Bishop. A series of struggles ensue, as Tarwater fights an internal battle against his innate faith and the voices calling him to be a prophet, while Rayber tries to draw Tarwater into a more “reasonable” modern world. Both wrestle with the legacy of their dead relatives and lay claim to Bishop's soul.

O'Connor observes all this with an astonishing combination of irony and compassion, humor and pathos. The result is a novel whose range and depth reveal a brilliant and innovative writer acutely alert to where the sacred lives and where it does not.

“There is very little contemporary fiction which touches the level of Flannery O’Connor at her best.” ( New York Herald Tribune)
“I am sure her books will live on and on in American literature.” (Elizabeth Bishop, American poet laureate and Pulitzer Prize winner)

What listeners say about The Violent Bear It Away

I hadn’t read anything by O’Connor before and didn’t know what to expect. It was very dark and truly excellent. I’ll be pondering it for a while. I intended to read it over the course of a week but it was so gripping that I finished it in a day. The narrator has a wonderful voice for the writing style.

O'Connor was ruthless in her vision. The struggle of Tarwater and his uncle Rayber against their joint destinies and the pull of fundamentalism and secularism is fully realized in this short novel. The Violent Bear it Away is biblical, American and absolutely brutal in both its imagery of destruction and language of redemption. I can only think of a handful of writers who seem to grab both my brain, my spine and my gut at the same time. O'Connor can't be over-appreciated; she was an absolute genius of passion and power. So brilliant and terrible was this novel, that I still exceedingly fear and quake.

This book is easily one of the best I have ever listened to. It is Flanery O'Connor, so one must be prepared to read this text like someone who understands literature. Remember that O'Connor is deeply rooted in Catholicism, and scholasticism. Remember that she is first and foremost a committed Christian. Her characters will be grotesque, and there will be tremendous violence and disturbing images, but the book will stick with you forever. It will point to deeper transcendent truths that are timeless and eternal.

Reading Flannery O'Connor will enrich your life, but please understand that you are not listening to surface level romance novels / John Grisham stuff here. This takes hard work and patience, but it is work that will be deeply enriching should you undertake it.

The narration is perfect. The southern accent throughout is very important, and the individual voices of each character are pitch perfect. Simply outstanding.

I am typically bored by literature that is too overtly influenced by the Christian faith/the Bible. Somehow, Flannery O'Connor has escaped such classification for me, and I am riveted by her, absolutely stunned: every time I read her, it feels like the first time I have encountered the idea of God. I liked Wise Blood, but The Violent Bear it Away is in a league of its own. This novel is so dark, and so unflinchingly intelligent and so surprising, and I wished it were 20 hours long instead of six. In fact, I listened to several chapters several times, not because they were difficult to follow, but because I was so amazed by her craft and its unfolding. It will be a difficult novel to follow-up.

Where does The Violent Bear It Away rank among all the audiobooks you’ve listened to so far?

This is among the very best audiobooks I've listened to. The performance is haunting and captivating. The text is elevated and infused with meaning by the reader.

If you were raised in the rural South or spent the summertime there with someone in your WASP family, you may still suffer the occasional nightmare, as I do, from the trauma left by hellfire and brimstone sermons or a fundamentalist Sunday "school" or two, having been left at an impressionable age (8 to 14) with the constant fear that you and all who have not yet been saved will be eternally damned if you do not save them from this blasphemous world, and spooked by the bountiful ignorance that surrounded you.

Flannery O'Connor, a devout Catholic, was super-critical of fundamentalist Protestants. Her short stories and two novels either explored dark religious themes or were tinged with often morbid religious undertones.

THE VIOLENT BEAR IT AWAY's title is taken from a verse in the Douay-Rhiens Catholic Bible at Matthew 11:12: "From the days of John the Baptist until now, the kingdom of heaven suffereth violence, and the violent bear it away."

I'll forego delving into possible meanings of the title, and any discussion of the novel gives away what happens at and near the end of the book. I'll just say that it's a BRUTAL book, dealing with a 14-year-old boy, fanatical, Southern fundamentalists and the related themes of destruction and redemption.

If you are looking for an enjoyable summer read, perhaps you should look elsewhere. If you'd like to get a sampling of the deeply dark, morbid and haunting world of Southern fundamentalist ol' time religion, purchase now.

Southern Gothic novels are so haunting and chilling all the same filled with things that could be considered magical realism, and as a Southerner, despite the time gap between many novels in the genre, you can still see how some of these ideas are so pervasive in the south such as the religious fervor that provide the focal point of this love. This is the first novel I’ve ever read by O’Connor. She’s known more for her short stories and wrote only a very few novels in her lifetime. This story follows the struggle of a family who are marked by a legacy, starting with a mad uncle who claimed to be a prophet, leaving behind two nephews who struggle against and for the marks he’s left on their souls, two family members living two extremes–the overzealous and the overdisciplined–as they follow a path of self-fulfilling prophecies left behind by an old man. The title of this books comes from the bible verse Matthew 11:12 (from the Douay-Rheims version of the bible): “And from the days of John the Baptist until now, the kingdom of heaven suffereth violence, and the violent bear it away.”

The narrator interprets this novel in a wonderful way. The novel itself is superb. The narrator has a way of clarifying who's speaking and hinting at significant images as they unfold. Very satisfying.

I loved this book early, then it bogged down. I did not care for the schoolteacher character, and I am probably not going to read any more O'Connor. This one had enough elements of unique, disturbing storytelling to be worth the time though. Picks back up at the end. Not sure what to say about it still- a bit of an exploration of the prophet "type" in modern society. And a story about manipulation. The characters are all trying to make the world like themselves, and especially the "hero". Never read a book like it, and that is really its best quality. The early chapters are much funnier than the book on the whole, and that tempered the subject in a way I liked. I laughed a lot at the old man, and I think one is supposed to.

The Title Says It All

A bleak book with sustained religious imagery, that's what you're in for. O'Connor is such a powerful writer, though, that you occasionally get lost in the poetic beauty of her phrasing and forget how depressing the story is. But the story always jerks you back to reality.

I enjoy the works of Flannery O' Connor though I do prefer her shorter stories. The Violent Bear It Away is a bit all over the map at the beginning - past to present to even further in the past, etc - and can make for a confusing listen, but when this novel hits it stride somewhere in the middle the story flares. The narrator does a decent job bringing the story to life. I would suggest using your credit on A Good Man is Hard To Find or Everything That Rises Must Converge first.

A classic of American literature, the writing is wonderful, but it's not an easy listen for a long car journey. Although it's supposed to be a Catholic novel and an affirmation of O'Connor's faith, it is very hard to find a chink of light here. None of the characters possess so much as a breath of humanity, compassion or humour and the whole thing is a dark, nasty, brutal argument. Yes, it is a triumph of something or other, probably writing prowess, but it's not fun, and leaves nothing but despair.

Resist destiny at your peril!

Francis Tarwater was raised by his preacher great-uncle – destined to be a prophet. He resists his destiny; he does not bury his great-uncle, he goes to live with his uncle, he does not want to baptise his cousin, he does much worse! He is in the thrall of his ancestors, his nature and his destiny. Powerful, sensitive and moving with fantastic Southern States voice.

It is a wonderful book,visceral language of a true writer.Flannery's health was never of the best and she died young (in her thirties),perhaps that is why her view of the World at times seems so narrow but at other times embraces everything that has puzzled men and women since time began.I felt the mid West sun burning my eyes and how strange to call a young child Bishop.