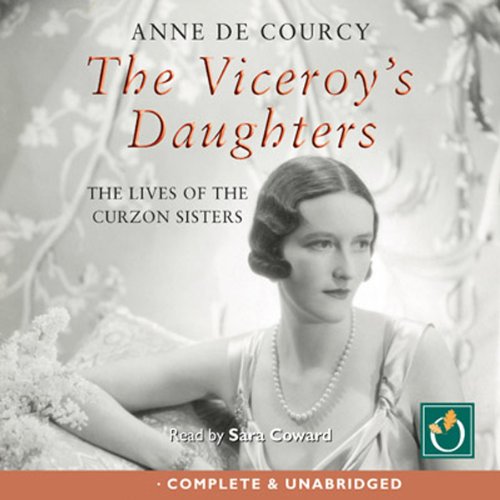 The three Curzon sisters - Irene, Cynthia (Cimmie) who married Sir Oswald Mosley, and Alexandra (Baba) - were at the heart of the fast and glittering world of the '20's and '30's.

The sisters saw British fascism from behind the scenes and had an equally intimate view of the arrival of Wallis Simpson and the marriage and life of the Windsors. Based on unpublished letters and diaries, this is a wonderfully revealing portrait of British upper-class life during the first half of the 20th century.

"Celebrity lovers will love this book, which covers all aspects of the lives of this elite group, it's wealth, manners (ill-bred and upper crust), lusts, and political intrigues" (Library Journal)

fascinating from start to finish

The biographies of the three Curzon sisters and the social history of their times make for fascinating reading. The Curzon family and their set led fascinating lives, although they were not always admirable or even likeable. The cast of peripheral characters is varied and spectacular: Oswald Mosley, Hitler, the Duke and Duchess of Windsor, Nancy Astor, and many others - the rich and famous and influential of the era. A lot of research has gone into this book, and quotes from letters and other documents allow some insight into the motivations, emotions and reactions of the central characters. It is all beautifully recounted, and I was always reluctant to switch off the book and keen to get back to it. The narrator is excellent - importantly she correctly pronounces the foreign words and names. If you enjoy biography, social history, or gossip about the rich and famous, you should enjoy this well-written and well-read book.

Less interesting than it should be

The most interesting section involves Cimmie, her infatuation for the revolting Oswald Moseley, her loss of him to Diana Mitford and her tragic death.

Irene comes across as a failure - an alcoholic who never found true love. Her life was far more than that, yet we only see her in this dimension.

Essentially, this is where I was disappointed with this book. The private lives of people who achieve much in the public sphere may be less than perfect, but without a good treatment of their achievements, you cannot understand the full person and they become far less interesting.

Part of the British Aristocracy Network

The three women who are the subjects of this book all played roles in the social and political history of their era. For example, Cynthia Mosley was married to Oswald (Tom) Mosley before her death after which he married Dianna Guinness (nee Mitford). All three women formed part of the closely interlinked and fairly small network of upper class society which shaped so much British social and political history, especially between the wars.

The aspect I enjoyed most was the uncovering of these fascinating links. I have read a lot about the Mitfords for example and in turn Mosley, but this book illuminates Cynthia's 'side' of the rather sordid story of her life with Mosley. Other insights include the Prince of Wales and his affair with Mrs Simpson; and the turbulent political scene in the UK in those years.

I think the book is very well written and appears to be a product of painstaking research. At times, it was a bit dull but this was largely when we were dealing with the childhood years. Sometimes, it felt as if lists were being read aloud as we hear the list of names attending such-and-such party. But overall, it gives a vivid impression of this era, for this class of person - and much of it is astonishingly immoral, louche and decadent. All three women at one time or another slept with Mosley, for example, albeit that Cynthia did so as his wife. The other sisters, especially Baba are at times just unbelievable.

There's a lot of self-pity from the women who never seemed especially happy despite their wealth and privilege. Not surprising perhaps given their bizarre and emotionally cruel father and the choices they all made regarding marriage. But I did want to them to stop whining sometimes. It goes to show, too, that no matter the wealth and position some people inherit, they are still often miserable!

The narrator is good. Sara Coward also plays Caroline in The Archers and I like her voice which seems to soften as you get to volume 2 - maybe she had a cold in the first volume. She can't do an Irish accent for toffee and there is a fair bit of this but it didn't really matter.

I enjoyed this greatly. It in fact I had read the book some years ago but I enjoyed listening to it again. I just felt the end years rather rushed and squashed in.

The narration of this audiobook may sound; at first, quite good, however it doesn't sound right when the narrator uses the letter 'f' instead of 'th' e.g.. HH Askwith is read as 'Askwif' and 'Mary's death...' as 'Mary's def'.... I think it is awful, also 'Weather...' is recorded as 'Wefer'.. Please listen intently, this is not a criticism of the Narrator, but the audio production - very poor.

The lives of Curzon's daughters, examined not only through events but through diaries, letters and other personal exchanges, gives a fascinating vantage point on the first half of the 20th century, from life in 'society' to the rise of British facism, the abdication of Edward VIII and the Second World War.

The narrator reads clearly, with good pace and expression, and her voice is right for the book.

This book proved very enjoyable in every sense, far more so than I had expected.

I enjoyed this account of the sisters lives and the links with the history of the time. The writing helped you empathise with each daughter. I was intrigued until the very end.

I would recommend this to everyone that are interested in WWII and the abdication of Edward.

A fascinating story of three sisters who led amazing lives in an important period in English history. Their friends included royalty, politicians of diverse and opposing views and representatives of the arts.
This story provides an insight into the main characters who held influence and helped to shape the course of history. The selfishness of some of the characters is truly amazing, especially the Windsors and suspect that many people in England realised that Wallis Simpson in many ways did our country a favour because I fear that as a king her husband would have been a disaster.

What a truly wonderful book, giving you a full insight into how the other half live. And amazing amount of inside information peppered with scandal, adulterous affair and enchantment.

A wonderful insight in to the lives and world events taking place at this time in history when all changed for all levels of society. Perfect narration, let's have more of Anne de Courcy books available on Audible please.

this is a fascinating slice of history, very well researched, beautifully told and narrated - highly recommended

An insight into life before and after World War One and two.
Breathing life into all those great names.