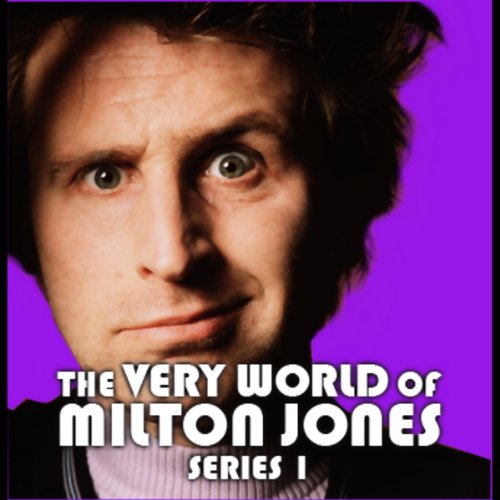 The Very World of Milton Jones

BBC Radio 4 has a new star on its hands. No-one knows where he's from: "As a child, I always remember my father saying to me 'Son, to pay for your education your mother and I had to make a lot of sacrifices.' Because they were both druids."

No-one can predict what he gets up to: "I'm not getting on with my yoga teacher at the moment...which frequently puts me in a very difficult position."

And no-one can tell what made him the way he is: "You see when the boys in the playground found out that I had a potentially fatal allergy to peanuts they used to shove me up against a wall and make me play Russian roulette with a bag of Revels."

Each week, Milton Jones faces his own death. His life flashes before his eyes. We hear everything that's happened to him, and anything that might have happened to him. His hopes, his dreams, his fears. BBC Radio 4 invites you to enter The Very World Of Milton Jones. Your mind will never be the same again.

What listeners say about The Very World of Milton Jones

Milton Jones has a very love it or hate it style of comedy, mainly revolving around puns and wordplay, which he gets a lot of mileage out of, and if you know his work you'll probably already know which side of the fence you are on: I for one love his humour. It's easygoing, undemanding, and sometimes even clever. This series revolves around Milton's imminent death from an impending disaster- a different one each time and a Fairy Godmother type showing him his life, with a ton of nonsensical reminiscences, running gags and daft one liners. If you like surreal humour this has lots of value across its 6 episodes. Highly recommended.

Not such a fluid Milton

The odd one-liners that Milton is known for

Not a lot to be honest. I'd never heard his radio show and found it slow-paced and quite unfunny in parts. Seemed a bit old fashioned

I think Milton Jones is one of the funniest and inventive comedians on the circuit. Clearly this radio show was not designed for me and I didn't enjoy it. 'll stick to his stand up