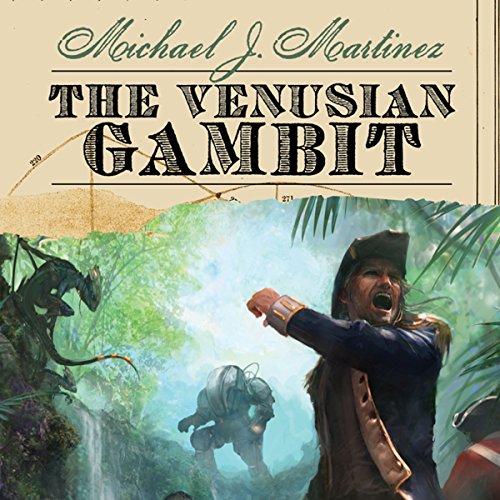 The last chapter of the dimension-spanning Daedalus series brings the 19th and 22nd centuries together for an explosive finale in the jungles of Venus!

In the year 2135, dangerous alien life forms freed in the destruction of Saturn's moon, Enceladus, are making their way toward Earth. A task force spearheaded by Lt. Cmdr. Shaila Jain is scrambling to beat them there while simultaneously trying to save crewmember Stephane Durand, who was infected during the mission to Saturn and is now controlled by a form of life intent on reopening a transdimensional rift and destroying the human race. But Jain doesn't realize that the possessed Stephane has bigger plans, beaming critical date to other conspirators suspiciously heading not for Earth but for Venus....

In 1809 - a Napoleonic era far different from our own - the French have occupied England with their Corps Eternélle, undead soldiers risen through the darkest alchemy. Only the actions of Lord Admiral Thomas Weatherby and the Royal Navy have kept the French contained to Earth. But the machinations of old enemies point to a bold and daring gambit: an ancient weapon presumed lost in the jungles of Venus. Now Weatherby must choose whether to stay and fight to retake his homeland or pursue the French to the green planet. And Shaila must decide if it's possible to save the man she loves or if he must be sacrificed for the good of two dimensions.

In the dark, alien jungles of Venus, humanity's fate in both dimensions hangs in the balance - forcing past and present to once again join forces against an ancient terror.

What listeners say about The Venusian Gambit

i had these books in my to do listen to list for months since a trip to Portland. I wished I read this before hand. overall this was a very satisfying end to the series though it leaves an opening for a spinoff. possibly with the kids or of the Xan. I hope there is one.

This book would make an amazing movie

But you're better off reading it. The performance brought the book to life and had me traveling the solar system, what better way to spend your time stuck in traffic.

Where does The Venusian Gambit rank among all the audiobooks you’ve listened to so far?

Very near the top. I will definitely relisten to the whole series.

What other book might you compare The Venusian Gambit to and why?

Naomi Novick's Temeraire series is the only one I can think of. And that still isn't that similar.

Any part where they were on one of the Known Worlds in the Napoleonic timeline.

When Weatherby allowed his daughter to negotiate with the Venusians.

I received a free preview copy of The Venusian Gambit because of an interview I did with the author for a podcast.
Ever since the first book, I have been very enamored of the Known Worlds from the second timeline. This book was no exception. Every time we got to visit a new world, I was fascinated. Getting to know a little more about the Venusian culture was great.
I'm hoping someday, Mr. Martinez will go back to the Known Worlds.

Again, outer space, sailing ships and the Napoleonic wars! This the third volume of the trilogy closes the tale in a grand way. Excellent characters, jam packed plot. A yarn to enjoy!

This gambit succeeds with brilliant narration

I cannot recommend the Daedalus series and The Venusian Gambit in particular, highly enough. A well-written adventure over sea and space on a
grand scale amongst many cultures and worlds with fascinating characters, the best of whom exhibit exceptional honor. What’s not to love?

The Venusian Gambit brings the Daedalus series to a satisfying, yet bitter-sweet conclusion. Parting is such sweet sorrow particularly from a series of which I’ve been *blush* a raving fan-boy from the beginning. I am, however, heartened by the fact that Michael Martinez will sail on to new writing horizons. Right now, he’s having a little fun with a story built around the Pathfinder Game, about which more here.

Most of what I loved about this book are what I’ve loved about all of the books in the series, so I won’t tread over ground covered in my review of The Daedulus Incident and review of The Enceladus Crisis. In this review, I’ll focus on some new elements to the series The Venusian Gambit brings. (Amazon has a nice description of the plot.) Note: there are spoilers below for the previous two books in this post. Not going into detail over old ground doesn’t lessen or detract from what I’ve previously said, but I’ll simply summarize what I love most about these books. There are plenty of books with cleverly inspired plots and the idea of these two timelines coming together is brilliant. But the proof of the pudding is the eating and the greatness of a book is in the writing. Execution is everything. In this series, the ideas are fleshed out and live in dialog and pacing, story arc and character. It takes that initial plot line and allows us to live it. We have a sense of the duty and honor that pervade the lives on H.M.S Victory (and the Royal Navy) and (most of) those in the JSC. Not that there aren’t disagreements (and even times when one feels betrayed by what another thought honorable), but the willingness to seek out the best for King (and Queen) and country, even for the known worlds, wins out. Not that the books are morality tales, they are drama filled with hopes, loss, sacrifice, greed and love. We have villains and big damn heroes.

The two narrators, Kristen Kalbli & Bernard Clark, perform the future and past timelines, respectively, then swap chapters as the timelines come together. It’s brilliantly done. It’s amazing how much one associates characters with the narrator's approach to voicing them. I’ve come to know General Maria Diaz through Ms. Kalbli's voice. When Mr. Clark takes over, his approach is, understandably, starkly different. It took a bit of adjustment. Both are great, but different. As with all of the series, I highly recommend the audiobook, if you go for such things. These are great narrators with a clever scheme of having them in different roles.