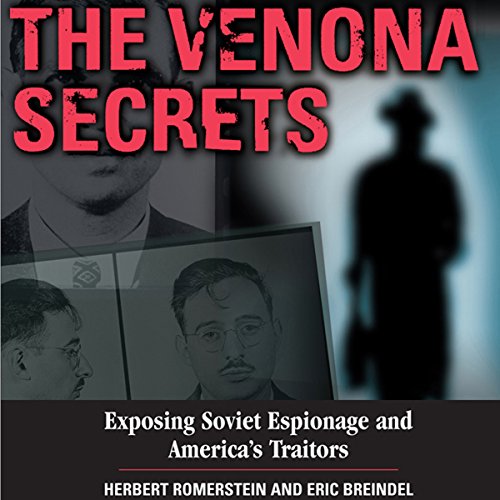 The Venona Files are several intercepted communiques between the Soviet Union and American Communists following WWII. Some historians and journalists are starting to regard the Cold-War-era American Communist Party as nothing more than a quaint club of polite if misguided ideologues.

In The Venona Secrets, Herbert Romerstein and Eric Breindel intend to create a new impression of treacherous Americans "who willfully gave their primary allegiance to a foreign power, the USSR.... For Communists, true patriotism meant helping to make the world a better place by advancing the interests of the Soviet Union in any way possible." By using the now-celebrated Venona documents - top-secret Soviet cables sent between Moscow and Washington, D.C., in the 1940s - Romerstein and Breindel tell a frightening story of how deeply spies penetrated the U.S. government.

What listeners say about The Venona Secrets

The Stalin Burreau in America

We all heard about McCarthyism and Alger Hiss and the Communist Spy Rings, but I always thought that stuff was all hype. With the fall of Soviet Union and access to Soviet archives we NOW know that the Soviets penetrated almost every tier of American government. To be honest, this revelation is almost TOO big to wrap my head around. In many ways, it changes my entire understanding of postwar American history....

Venona is a code name given to the NSA's Soviet code-breaking project. Once cracked, Americans could start translating secret spy cables between the Soviet Union and their agents in America. We only had half the story. With the REST of Venona....available only since the mid 1990's...we now have the other half.

The narrator is awful, but the content of the book is amazing. I am now reading other books on the topic just to be sure I understand the subject matter. There were high-level government officials, particularly in Treasury and State Departments who took ORDERS from their handlers in Moscow....who in turn took their orders from the brutal Joseph Stalin. Really?

If you could sum up The Venona Secrets in three words, what would they be?

What was one of the most memorable moments of The Venona Secrets?

The murder of Trotsky.

The attempted murder of Trotsky--how can bullets be flying everywhere but Trotsky survives?

The truth is much stranger than fiction.

should be required reading for every high school s

Most Americans are ignorant to the extent of the Communist influences in our soviety today. This confirms that HUAC was spot on.

The book is a decent history of Soviet intelligence but not very illuminating of Venona. The authors used Venona as a scaffold on which to drape a lot of material not specific to Venona. If you are new to the study of Soviet history then you will learn much, but if not, then most of the book will be just a re-stating of previously known material. I was disappointed in the book as well as the sluggish performance.

This is an amazing story, one that every American should be made aware of. The problem I have with the book is the narrator’s style. Imagine someone in a public place telling you a long and complex story in a voice so that nobody nearby could hear what he’s saying.

This narrator made the book tough to get into and hard to listen to for any length of time.

Lurch was the narrator

The Venona intercepts should be required reading for everyone as some of the liberal shibboleths are put to rest like, for example, the Rosenberg's innocence and Alger Hiss' relationship with the Soviet Union. However, the authors take, in my opinion, literary license with other facts such as Harry Hopkins' being a soviet agent, a charge that has never been conclusively sustained by any credible investigation. All in all, the raw Venona data is very, very interesting. The narrator is a member of the Addams family as his narration is not only colossally mind numbing but creepy. I had the sensation that I was listening to a medical examiner dictate an autopsy report.

The topic is interesting, but there is literally hundreds of so and so talked to such and such that unless you sat with your eyes shut and focused on every sentence it’s hard to follow. Just way too much detail. Felt like listening to someone read a textbook. I tried hard to complete it, but after the disappointment of the Rosenbergs chapter I had to stop.

Spies in the Highest Govt. Places

An eye opening report on Communist penetration into our media, education, social services, government, military, and intelligence organizations. One cannot help but wonder who are the current spawn of spies in America now.

a little redundant at times, a lot of skipping back and forth. monotone but helps to speed up the pace of reading

This is all about Soviet espionage and disinformation during the Second World War but the methods are strikingly applicable to the tactics of the 21st century far right. The Free Staters, Oath Keepers, Pro Life, Libertarian, survivalists and other far right movements are attempting to use similar tactics with, thankfully, less success. It only works if the general population is trusting and naive and ignore the double speak, i.e.,the anti big government folks want government to control the reproductive rights of all women and their policies favor a government based on Christian values... not unlike the islamic goal of imposing the koran as the ultimate authority. They are all anti democratic and we should all be skeptical.

Informative and quite enjoyable

I listened to this after the excellent M Stanton Evans book on Senator McCarthy, which really opened my eyes to the media lies told about him.

It's a little dry in places, as there are lots of lists of names (necessarily when talking about spy rings), but well worth buying and downloading.