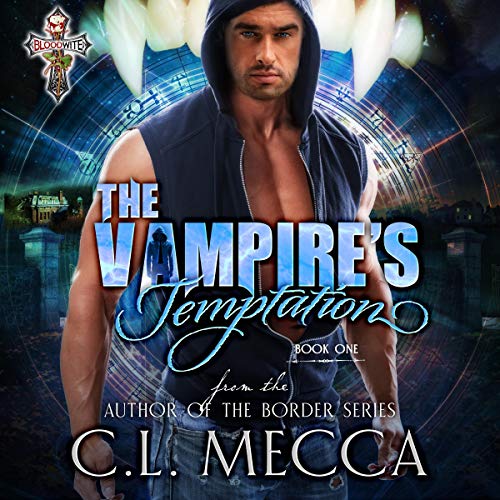 Even cursed blood can fall prey to love’s bite.

Kenton Morley and Lawrence Derrickson have hated each other ever since they were feuding border lords in medieval England and Scotland…700 years ago.

When their bloodlines were cursed, birthing the world’s first vampires.

Their feud has since carried through the centuries based on a new argument: Kenton seeks to destroy the Cheld - the only line of humans capable of killing their kind - while Lawrence seeks to save them.

It’s said that men can forget, but never forgive. It’s also said that true love knows no bounds. When the vampires move to Stone Haven, Pennsylvania, Alessandra Fiore will find out firsthand which of those old adages is true.

It doesn’t matter whether she believes in vampires or not....

Because they believe in her. And she’s on the very cusp of discovering her dormant powers as a Cheld - a potential vampire hunter.

And with both of these strangely wealthy newcomers’ storming into her sleepy, peaceful town, warning her to stay away from the other, what is a girl to do? Especially when Kenton—the one that supposedly wants to kill her—has a devilish twinkle in his eyes that she just can’t say no to?

No matter how dangerous she instinctively knows both men to be, strengths and powers of her own are beginning to bubble to the surface, encouraging her that she can take care of herself, thank you very much.

Love and Hate - two sides of the same coin. Literally.

The only thing left to do is flip that coin and hope for the best...to see which old saying is true. And how many innocents bet the wrong way.

What listeners say about The Vampire's Temptation

An engaging enemies to lovers story that pulled me in from the first chapter until the last word. It wss gratifying to see Kenton change his mind and his thinking on chelds and Allesandra. I was nad crushing on Lawrence throughout this story, and I can't wait for his story next. I voluntarily listened to a free copy of this and am giving an honest review. The narrator did a great job with voices and expressions bringing it to life.

I love Vampire stories. This one is no different. I cannot wait until I get into the next one. Cecila Mecca sure knows how to spin a tale that will inthrall you so you will be in the story and forget you are reading/listening to the story. That is what I love about this author.

I had previously read this book, but the audio narration just added even more to a story I loved. Not to be missed.

Honestly don't even bother reading the review, just read this book. You won't regret it.

Feuding Scottish/English border lords turned blood-cursed vampires, Kenton Morley and Lawrence Derrickson are still on opposite sides in modern day Pennsylvania. Kenton wants to destroy and human of the Cheld bloodline, descendants of Lawrence's late brother, and the only ones capable of killing old vampires, but Lawrence wants to protect them. In the small town of Stone Haven, Pennsylvania, the two clash once again over the fate of Alessandra, a college history professor and a Cheld who is just about to discover her powers. Both men warn her away from the other and she doesn't know who to believe, but her newfound powers are encouraging her to believe in herself and her own instincts. Kenton finds himself drawn to Alessandra and not just to kill her; he has to keep reminding himself that she is his enemy. Kenton is burdened by his conscience, but determined to eliminate the threat the Cheld poses to his family and he reminds himself that no Cheld is innocent. The Cheld are responsible for the deaths of his parents, so Alessandra must die. His body just doesn't want to cooperate, and, though he won't admit it, neither does his heart.

I'm not typically a fan of paranormal, but I love Ms. Mecca's writing so I jumped at the chance to try her new series. I loved it! I could not put it down, literally devoured it in a day, and am now anxious for the next installment. There were a couple points where I felt like I'd missed something and needed to go back and reread, but I read an ARC, so I'm sure this will be sharpened up in the final draft. Even if it isn't this is still a great read that should not be missed; even if you're not a paranormal fan, I'd recommend you give it a shot.

I received an ARC in exchange for a honest review. Thank you!! All thoughts and opinions are my own.

This was a great story. Enjoyed the world Ms. Mecca creates, and am looking forward to reading/listening to more in this series!

The Narrator James Cavenaugh did a wonderful job! His voice was so good. Can’t wait to hear another one. The story was very entertaining, well written .

I love paranormal romance but I wish this had a little more to it. The characters were fun. The voice actor was great. However, the story just felt like it was missing something small. Like the conflict wasn’t large enough or the resolution was to easy.

Great first in a new series

This is the first book in a brand new vampire series. And it's refreshingly different from other series. There is a new spin to an old favorite. How about vampires walking in the sun? How about a villain who is also a hero? Want to know more? You better listen to the book! I thoroughly enjoyed this book and can't wait to find out where Ms. Mecca will take us. I do know that the stories will be great and the characters interesting and the vampires swoon-worthy. And talking about swoon-worthy - listen to James Cavenaugh's voice!

Alessandra was coming into her powers as a Child, when Lawrence and Kendin came into the town. one to protect and one to kill her. Alessandra is getting ready to start a new job when both men come on to her. they try to convince her that she was different and her heritage is to kill vampires. the vampire who was supposed to kill her ends up having feelings for her. will he go through with her death or will they be able to get past what his job is.

Not to be missed vampire romance!!!

I absolutely love this series, the storyline is so intriguing and really keeps you enraptured from beginning to end. If you love a great paranormal vampire romance with mystery, drama, steamy moments and just a great story then you don't want to miss out on The Vampire's Temptation. Whether you read the book yourself or listen to the audiobook you won't be disappointed.

The narrator of the audio version did a wonderful job at portraying each character.