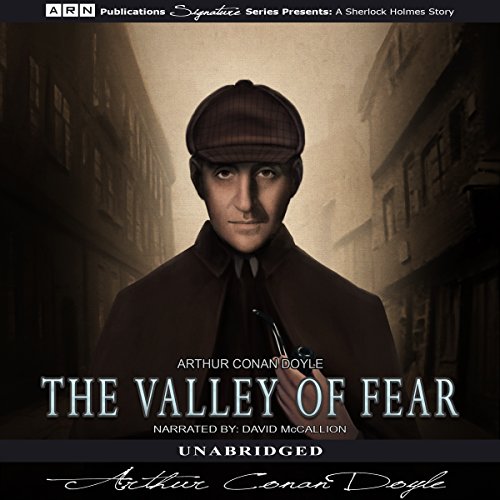 The Valley of Fear

Sherlock Holmes receives a mysterious ciphered message from a man using an alias sent to Professor Moriarty. After deciphering the code, more than once, they uncover that a man named John Douglas is in imminent danger, and Holmes believes that Professor Moriarty might be involved. Holmes and Dr. Watson enlist the help of Inspector Alec MacDonald of Scotland Yard. The inspector and Holmes have different theories on who killed John Douglas, who was shot at close range inside his own home, and they go on the hunt for clues.

The crime scene is an extremely brutal one, with Douglas no longer having a face.

A mysterious message is found on Douglas's body and his wedding ring has been removed from his hand. The message leads them to a secret society and a mysterious place called The Valley of Fear. Being a Sherlock Holmes novel, nothing is really as it seems, and Holmes must look beyond the obvious to discover who the real killer is, what the Valley of Fear really means, and if John Douglas really was who he appeared to be.

What listeners say about The Valley of Fear