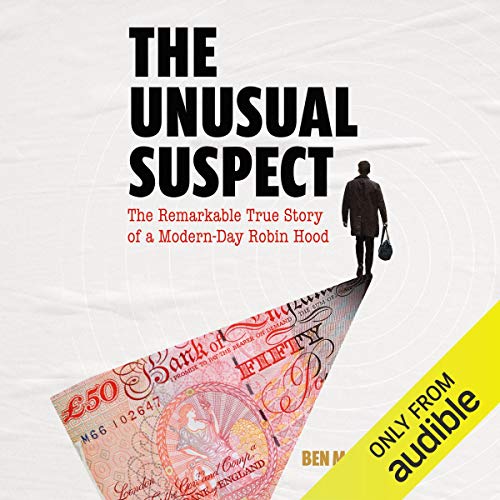 Stephen Jackley was a young British geography student with Asperger's syndrome. When the global financial crisis hit in 2007, he became obsessed with the idea of Robin Hood. With no prior experience, he resolved to become a bank robber. He would steal from the rich and give to the poor. Against all likelihood, his plan actually worked.

Jackley used disguise, elaborate escape routes and replica pistols to successfully hold up a string of banks, making away with thousands of pounds. He committed 10 robberies in Southwest England over a six-month period. Bank notes marked with 'RH' - 'Robin Hood' - began finding their way into the hands of the homeless. The police, despite their concerted efforts, had no idea what was going on or who was responsible. That is until Jackley's ambition got the better of him.

This is his story.

"Meet Stephen: university student, bank robber, modern Robin Hood, human being. He was only good at one of them, thankfully it was the only one that mattered. A truly remarkable story." (Terry Hayes, author of I Am Pilgrim)

"Stephen Jackley, the 'Robin Hood' bank robber, is an Asperger's student with an incredible, increasingly dark, story, which Machell tells with Hollywood box-office wit, compassion and brio. With every page, you find yourself screaming 'Oh my god - what are you doing, Stephen?', all the way to him ending up in US jail. How one young British man's misguided plan to save the world went increasingly, dangerously wrong." (Caitlin Moran, author of How to Be a Woman)

What listeners say about The Unusual Suspect

A great story let down by a poor audio performance

This is a fascinating story which is let down by this audio recording. There are two narrators - or it is the same narrator but recorded at different times (as a result it feels like two different people). The second voice (which is noticeably different to the main narrator) interjects with a sentence here and there, with the effect of jarring you out of the experience of listening. There are times where the second voice even sound like it is computer generated. It really makes it difficult to listen to and spoils the enjoyment of this audio book.

Found it very hard to listen to. Narrator rubbish.

This isn’t a drama it’s an account of real events - so the accents and ‘voices” were not necessary, I found them very distracting.
The story is very padded out.
Did not enjoy it.

After deciding to take a gamble in this book I was glad that I did. A very interesting story well written and narrated. A few editing issues I thought, which makes it seem like there are two narrators tag teaming their way through the story, but it doesn't distract from the narrative. All in all very enjoyable.

What a fantastic and fascinating listen

I’m so pleased that I chose to listen to this book whilst on my daily dog walking duties over the past week. The construction of the storyline had me riveted and eagerly looking forward to where, and how, we were going next. Ben Machell you’ve written a superb true story about a very intricate, interesting yet extremely troubled young man.
I worked in law enforcement for 35 yrs, the majority of which was spent hunting down and locking up the bad guys. Very early on in career I remember a Senior Detective telling me that no two criminal minds think the same or are the same. How true that was for me and how true for the investigators who were trying to identify Stephen Jackley.
Excellently narrated by David Linski.

Not what it said on the tin.

In the interest of disclosure I should be clear that I did not finish this book.

It was initially annoying that the audio production was so poor. Whoever was responsible for the recording should have their head in shame - the different recording sessions - including added passages - where recorded in a way that made it so obvious that they were recorded at different times and at times even sounded like a different voice.

The book itself was very disappointing in that the story of the crimes plays a minor part and takes a back seat to the description and analysis of the boys life and motivations.
It should be made clear in the description that this is the case as the strap line suggests.
It’s not a crime novel in fact it’s not a novel at all (possibly my mistake).
It’s an account of mental health issues and their impact on an individual.
Possibly an important document, but not what I thought I was buying.

It appears the narrator had to re-record a large portion of this book and his voice and audio quality is different. When this changes mid-sentence it is very off putting.

The story itself is interesting but could have been covered in an hour or maybe two without ten hours of filler.