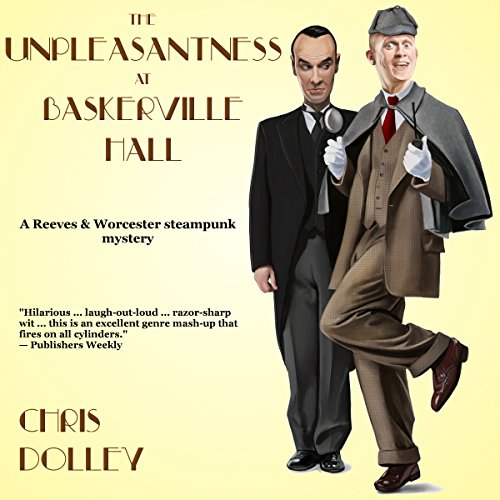 The Unpleasantness at Baskerville Hall

Wodehouse steampunk version of The Hound of the Baskervilles!

"Jeeves and Wooster meet (or run face-first into) Holmes and Watson with a touch of steampunk in the hilarious first full-length Reeves and Worcester tale.... This laugh-out-loud parody works on several levels.... With razor-sharp wit and fast pacing that plays fair with the reader, this is an excellent genre mash-up that fires on all cylinders." (Publishers Weekly)

An escaped cannibal, a family curse...and Reginald Worcester turning up on the doorstep. Could things get any worse for the Baskerville-Smythe family?

As the bodies pile up, only a detective with a rare brain - and Reggie's is so rare it's positively endangered - can even hope to solve the case.

But...there is the small matter that most of the guests aren't who they say they are, the main suspect has cloven feet, and a strange mist hangs over great Grimdark Mire.

Luckily, the young master has Reeves, his automaton valet, and Emmeline, his suffragette fiancée, on hand to assist.

This novel is the fifth Reeves & Worcester Steampunk mystery and is set a few months after The Aunt Paradox. The first four mysteries appear in the collection, What Ho, Automata.

What listeners say about The Unpleasantness at Baskerville Hall

This made me laugh, as is usual with Bertie & Jeeves, and captivated as I listened for resolution of the familiar mystery(s). Well written, imaginative, and witty, and the performance was impeccable.

Reggie and and Jeeves and Steampunk, Oh My

Good Show Mr Dolley for successfully meshing Hound of the Baskervilles and Bertie and Jeeves . I needed something very funny, witty and light and this was perfect. You took two things that are well known and still kept me wondering. Excellent choice of narrator. Mr. Rose keeps the tone perfectly. Another please?

if you enjoy numerous knockoffs of Jeeves and Wooster you should enjoy this. Wonderful array of characters. Helpful to read the previous book but not required.

An amusing mixture of Sherlock Holmes, Isaac Asimov and P.G. Wodehouse with hints of Shakespeare, Oscar Wilde and Poe.

Would Wodehouse be spinning in his grave or rolling on the floor in hearty laughter while listening to this loving steampunk tribute to his mastery of the Servant/Master class farces which entertained his audiences a century ago? Enhanced by Paul J. Rose's delightful narration, author Chris Dolley's twisted tale of mires and manors and the nascent motion picture industry includes a cleverly created whodunnit you will enjoy solving.

An interesting fact to point out at the outset, is that the author has combined genres to make for an interesting story. A little Frankenstein and a little Agatha Christie combine for a surprisingly funny murder mystery. Though I personally find the protagonist to be a bit annoying (we’ve all known people like this) and the cover art a little creepy, the book was enjoyable with twists and turns that are fun, albeit a bit confusing at times, to follow. The reader did an excellent job engaging multiple, unique voices to really imbibe the story with personality. Very entertaining! Always listen to your butler!!!

A Lighthearted and Fun Listen

What did you love best about The Unpleasantness at Baskerville Hall?

Have you listened to any of Paul J. Rose’s other performances before? How does this one compare?

Yes and I did, well if you discount a bit of pausing here and there for the kids.

I loved the way the story read. I had a smile on my face from beginning to end. It is a great lighthearted listen. Chris Dolley definitely wrote a very entertaining tale . If you want an audio book which is fun to listen to and will help lighten up your day, then you really need to give this book a chance!

I received this audio book in exchange for an honest review.

This story is a poor mesh of PG Woodhouse, Sherlock Holmes and a cozy murder.

Though well read, the story tends to ramble along with occasional moments of plot. Having a mechanical Man Servant and the main protagonist looking for rather than avoiding love, does not detract from grating juxtapositions.

wasn't sure about getting this book as didn't.like the tv series, but I really enjoyed it and often got the giggles. The narration was excellent and often increased my enjoyment .! I shall read the rest of the titles