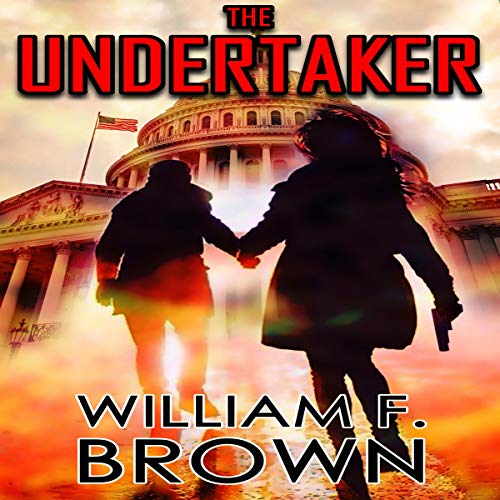 Pete Talbott is a California native and harried Boston computer wonk still grieving over the death of his wife Terri, when he finds himself at the wrong end of Gino Parini's .45 reading his own obituary torn from that morning's newspaper. Talbott figures it is all a big mistake until Parini shows him his wife's obituary too. That is a mystery Talbott cannot leave alone.

From a funeral home in Indiana, to car chases on the Dan Ryan, a bloody Back Bay townhouse, snipers in New York City's Washington Square, The Undertaker is a fast-paced mystery filled sleazy lawyers, corrupt County sheriffs, mafia hit men, the FBI, an army of Chicago cops, and an unforgettable scene in the upper berth of an Amtrak train. Snarky, funny, and terror-filled, The Undertaker is an action-packed thrill ride with a touch of humor and romance. Someone with a penchant for sharp scalpels and embalming tables is planting bodies under other people's names. If Pete Talbott doesn't stop them, he and his quirky new girlfriend, Sandy Kasmarek, will be next on the Undertaker's list.

What listeners say about The Undertaker

Where does The Undertaker rank among all the audiobooks you’ve listened to so far?

I've read (or listened to) several of Mr. Browns books (I listened to the audiobook of this one), and enjoyed them all. For some reason, this one didn't hold my attention like the others did, but it's a good suspense novel that almost becomes a romance novel before it's over. Without going into the details of the plot (several other reviewers have), I found that I had to 'suspend belief' on several of the adventures...kind of like you have to do in many adventure movies. The fairy tale ending made me chuckle with pleasure, since many of the books I read don't give me that kind of ending. .

Would you be willing to try another book from William F. Brown? Why or why not?

Even though I've like some of his other books better, I'd recommend this one and look forward to more of his writings

Have you listened to any of Eddie Frierson’s other performances before? How does this one compare?

I don't recall listening to him before, but I enjoyed his performance. He had a variety of voices for the characters and was easy to listen to.

You'll want a Kindle version too...

or a hard copy just to savor this delightful adventure at your own pace. Combined with the fantastic narration by Eddie Frierson, Bill's story comes across with the accomplished skill we've come to expect from the likes of Tom Clancy, Janet Evanovich and John Sanford. The 'Undertaker' needs no sequels, is filled with action, mystery and is funny as hell to boot. This book needs to be a movie, it's that good.

Good story, good narrator, an easy listen. Will get more audio books by this author!

We have a nice man who lost the love of his life, than he lost his job, and than as he came out of his alcoholic haze he discovered he was died. He re-read the obit and sure enough it said he had died in a fiery auto accident while driving too fast in Mexico. Well that helped him sober up a little faster and came back into the states. His brother in law was glad to hear that he was still alive, that he was missed and if he came to Boston he would also have a job. It all seemed so simple, just leave LA and go to Boston. It started out simple and soon it became a tornado of murder, dishonest police and even dishonest FBI. No matter which way he turned he just kept finding more people trying to kill him. Dang one crook wanted to embalm him while he was still alive, well maybe not embalm but he was willing to cut open a few arteries if he would just help him tell the nut case what he wanted to know. Dang!

An action-packed story that not only held my interest from start to finish, it kept me guessing what was going to happen next. Mr. Brown has created a character in Pete that is easy to identify with since he is a pretty normal guy who is being pushed to his limits after reading his obituary in the paper in a city where he has never lived. From this start this story morphs into one of mobsters, government agencies and a few character twists that make to a great listen/read. Eddie Frierson’s narration takes a great story and brings it to life with his multiple character voices.

Suspense, humor, and full of action. With excellent narration made this a winning combination to enjoy. Given audio for my voluntary review

I suppose I'm biased. The author is my father. But I really liked this book. Fast-paced, funny, and never boring. And if you're not related to him, the sexual innuendos will be harmless, not kinda creepy. You should totally buy this book for you and all of your friends!