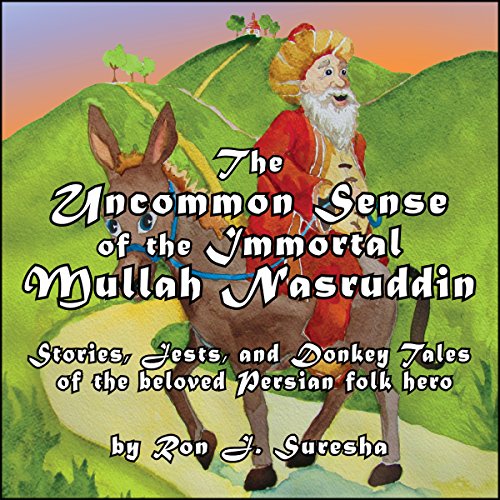 The Uncommon Sense of the Immortal Mullah Nasruddin

Once, when young Nasruddin was acting up in class by distracting his classmates with endless antics, jests, and stories, his irate teacher uttered a curse: ''Whatever you do or say, wherever you go or stay, whether it's night or day - people will only laugh at you.'' Now, eight centuries later, people everywhere are still laughing at the immortal Mullah Nasruddin, one of the world's most beloved folk characters.

This entertaining and insightful retelling of the Nasruddin corpus by noted anthologist and lifelong Nasruddin devotee Ron J. Suresha brings the beloved Persian folk hero into the 21st Century. With more than 343 stories (seven parts each with seven sections of at least seven stories), this collection easily becomes the definitive English anthology of Mullah Nasruddin wit and wisdom. Storytellers, folklorists, Sufis, comedians, spiritual seekers, and everyone who loves to laugh will be enriched and enlightened by the Mullah's uncommon sense of humor.

It’s easy to see why these tales are so popular. As you listen to them, they draw you in, making you eager for more.
The fact is: we all love a story, and these are short and in endless supply. I could also theorise about the truly wise - Nasruddin - often appearing foolish. Like all true sages, Nasruddin wears his wisdom lightly and doesn’t mind the inevitable next stage of seeming dumb. Nasruddin is so comfortable in his own skin that his stupidity is not even disingenuous. He’s a natural!
The hook-in for us is that when faced by Nasruddin, WE are the wise ones, in the same way that children love to correct the silly adult in pantomime or slapstick.
Of course, there are the moments when Nasruddin hits the nail right on the head!
I am now addicted, and know I will be returning to Nasruddin again and again!