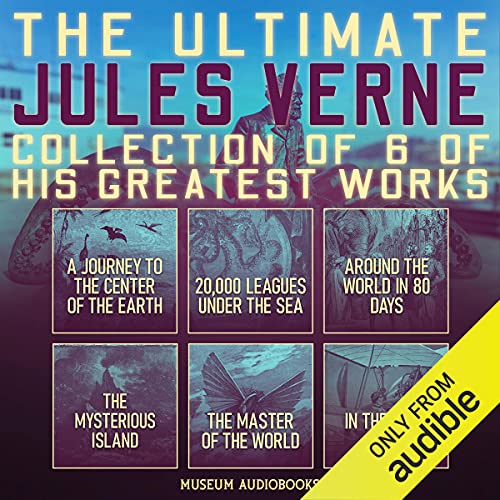 The Ultimate Jules Verne Collection of 6 of His Greatest Works

Jules Gabriel Verne (1828-1905) was a French novelist, poet, and playwright. In Europe, Verne is considered to be an avant-gardist and surrealist. In the Anglosphere, he is perceived as a writer of genre fiction. He has been called the "Father of Science Fiction", a title that has also been given to H. G. Wells.

The Ultimate Jules Verne Collection of 6 of His Greatest Works contains:

Book 1: A Journey to the Center of the Earth, a classic science fiction novel. The protagonist, Professor Otto Lidenbrock, is an eccentric scientist who believes that there are volcanic tubes that go down to the center of the earth. The professor’s party of three - he’s joined by his nephew Axel and an Icelandic guide Hans - enter Iceland's inactive volcano Snæfellsjökull in search of the tubes. They face many dangers, including tornadoes, cave-ins, and prehistoric creatures from ancient epochs that would devour them. Eventually an active volcano in Italy blasts the three of them back to the surface.

Book 2: 20,000 Leagues Under the Sea is part of Jules Verne’s most popular trilogy, along with Around the World in Eighty Days and Journey to the Center of the Earth. After chasing a “monster,” the protagonists find themselves prisoners on a futuristic submarine called the Nautilus. Their captor is Captain Nemo, and the prisoners enjoy a wild ride on the Nautilus. Visiting far-flung regions of the ocean, they see amazing coral formations, sunken vessels, the Antarctic ice barrier, the South Pole, the transatlantic telegraph cable, and Atlantis, the legendary underwater kingdom. In the underwater forests off Crespo Island, they hunt sharks, but when the submarine returns to the Atlantic Ocean, giant squid attack them.

Book 3: Around the World in Eighty Days (1873) is an acclaimed adventure novel which relates the adventures of Phileas Fogg and his French valet Passepartout as they attempt to circumnavigate the world in 80 days. From London, they go to the Middle East, and through the Suez canal on the way to Bombay. In India they experience a series of adventures and gain a third travel companion, after which a detective pursues them to China. Separated in Hong Kong, Yokohama sees them united again. After crossing the Pacific, they attempt to cross North America by train, with disastrous results. They surmount incredible obstacles in New York City and on the transatlantic trip, and then the challenge gets even more formidable. Around the World in Eighty Days, with its steam ships, boats, trains, elephant, and wind-powered sledge, remains a classic more than 150 years later.

Book 4: Jules Verne’s masterpiece, The Mysterious Island, is a fascinating story of five men and a dog who escape the American Civil War in a hot air balloon. A storm takes them far away and they land on an unknown island. One adventure follows another as they cope with pirate attacks and active volcanoes. After receiving a message in a bottle, they rescue another castaway on Tabor Island. In crisis situations, they are assisted by an unseen helper who once supplies medicine and another time beats back the pirates. During their stay, the men domesticate an orangutan called Ju. They are eventually saved by a passing ship.

Book 5: The Master of the World is a story told by John Strock, a federal police inspector. Set in 1903, the narrative opens with a series of strange events taking place across the eastern seaboard of the US: frightening vehicles are seen moving at impossible speeds, and there are signs of an impending volcanic eruption in a non-volcanic mountain range. The inspector discovers the cause of the weird phenomena - an inventor of unrivalled brilliance, who had just perfected a vehicle called The Terror. Inspector Strock tries to capture the Terror but the hunter gets captured by the game.

Book 6: In the Year 2889 is a diary of the observations of Fritz Napoleon Smith, the editor of an influential futuristic newspaper. It is an action-packed tale of technological advances and science fiction scenarios. Some of the predictions were remarkably accurate.