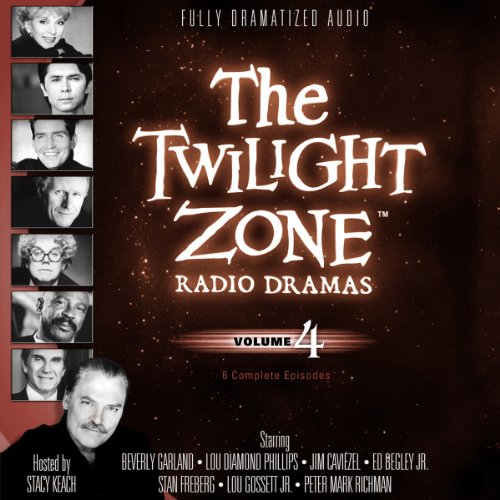 Experience one of television's greatest science fiction series: The Twilight Zone. This collection of episodes is fully dramatized for audio and features a full cast, music, sound effects, and narration by some of today's biggest celebrities.

"Steel" (starring Lou Gossett, Jr, written by Richard Matheson): In the near future, boxing has been outlawed and is performed by mechanical robots. The manager of a robot desperately in need of repair does the unthinkable to win a bout.

"Uncle Simon" (starring Peter Mark Richman and Beverly Garland): Barbara Polk has taken care of her detested uncle Simon for 25 years, waiting impatiently to inherit his wealth. But his will stipulates that she must take care of his latest invention, a robot that has an unnervingly familiar personality.

"The Parallel" (starring Lou Diamond Phillips): Astronaut Robert Gaines finds himself back on Earth after a crash landing - and in a world very similar to but not quite his own.

"A Hundred Yards over the Rim" (starring Jim Caviezel): In 1847, a wagon train is traveling from Ohio to the deserts of Arizona. One settler, desperately searching for water for his sick son, takes a walk that inexplicably leads him into the next century.

"One for the Angels"(starring Ed Begley, Jr): A salesman cleverly eludes Death - but if he lives, a little girl must die in his place. Only the salesman's greatest pitch can save her.

What listeners say about The Twilight Zone Radio Dramas, Volume 4

perfect for me when I'm doing all of my mom duties. I absolutely loved it! I'm a super fan of AUDIABLE books.They help me find some peace in my busy days.

It's good. That's for sure. I'll have to give it another listen or two to consider favorites or something.

Definitely enjoy these six twilight zone. Awesomeness at its best and definitely recommend to other twilight series fan.

Bought for my hubby who enjoys OTR and Si Fy. Enjoyed it but not as much as previous volumes. He is slowly working his way through all the volumes on Audible.

I own the first four volumes of these now and I can see the next 25 or so credits being spent on getting every single release. They are fantastic. I cannot recommend these highly enough for any radio drama fans or fans of Graphic Audio or Sci fi drama or of course The Twilight Zone TV/radio series.