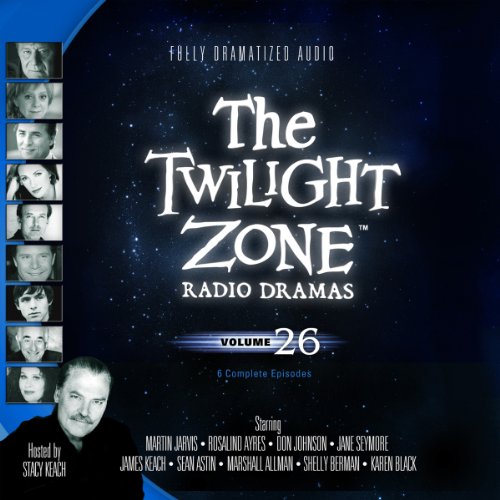 Experience one of television's greatest science fiction series: The Twilight Zone. This collection of episodes is fully dramatized for audio and features a full cast, music, sound effects, and narration by some of today's biggest celebrities.

"Passage on the Lady Anne" (starring Martin Jarvis and Rosalind Ayres): A young couple on the verge of divorce decides to cruise on a ghostly steamship to England in the hopes of saving their marriage.

"Execution" (starring Don Johnson): A murdering cowboy from the old west is transported to the present day by a scientist just as he's about to be hung. He has a second chance in a new world, but will his thirst for blood be quenched?

"The Fear" (starring Jane Seymour and James Keach): An unknown creature hidden in the shadows - apparently monstrously large and immensely powerful - terrorizes a hysterical young woman and a state trooper who's arrived to help her. But is this gargantuan invader really what it seems to be?

"The Amazing Dr. Kyle Powers" (starring Sean Astin): A cold, unsympathetic physician is given the opportunity to change his ways when an extraordinary visitor gives him the ability to experience his patients' symptoms. But will the good doctor change for the better?

"Nothing in the Dark"(starring Marshall Allman): An old woman consumed with the fact that she will die one day soon barricades herself in her cold, dark tenement apartment so that "Mr. Death" cannot visit her.

"The Hunt" (starring Shelley Berman and Karen Black): A man from the sticks can't figure out why everyone is acting like he's dead - including his wife. When she throws him a wake, he is really confused.

This is my least favourite of the series

I would not recommend this one. I did not like any of the stories, they had no interesting plot
lines. The acting was ok.