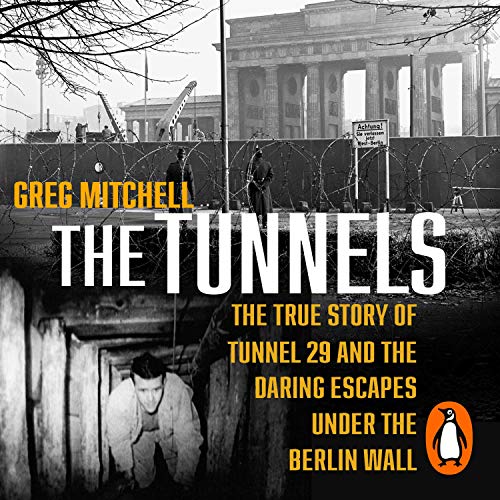 The True Story of Tunnel 29 and the Daring Escapes Under the Berlin Wall
By: Greg Mitchell
Narrated by: John Lee
Length: 11 hrs and 59 mins
Categories: History, 20th Century

In the summer of 1962, one year after the rise of the Berlin Wall, a group of daring young West Germans risked prison, Stasi torture and even death to liberate friends, lovers and strangers in East Berlin by digging tunnels under the wall.

Then, as the world's press heard about the secret projects, two television networks raced to be the first to document them from the inside, funding two separate tunnels for exclusive rights to film the escapes. In response President John F. Kennedy and his administration, wary of anything that might raise tensions and force a military confrontation with the Soviets, maneuvered to quash both documentaries.

As Greg Mitchell's riveting narrative unfolds, we meet extraordinary characters: the legendary cyclist who became East Berlin's most wanted man; the tunneller who had already served four years in the East German gulag; the Stasi informer who betrayed the 'CBS tunnel'; the young East Berliner who escaped with her baby, then married one of the tunnellers; and an engineer who would later help build the tunnel under the English Channel.

Capturing the hopes and fears of everyday Berliners, the chilling reach of the Stasi secret police and the political tensions of the Cold War, The Tunnels is breaking history, a propulsive listen whose themes still reverberate today.

A detailed book about the Berlin Tunnels

The Tunnels - The untold story of escapes under the Berlin Wall by Greg Mitchell is a great book, it details the early efforts of West German students in particular attempted to help their countrymen from the east.


The book describes the various forces at work,  the students, the escapees, the media and the state organs from east and west.  In the beginning the students helped escapees for idealistic reasons and did not charge for their services. Later on charges for services were made both by students and individuals who tunnelled on a commercial basis.


The media played a key role in a couple of tunnels both CBS and NBC were desperate to cover a tunnel escapes and offered financial instruments to encourage tunnellers. In doing this it could be argued that they exposed escapees to increased risk by publicising there work. On the other hand the input of the media increased the profile of the students and others, further it increased the financial coffers of the tunnellers.

Brilliantly narrated by John Lee as always. Gripping stories of the many attempts of people trying to be free. A bit daunting at times when the attention turned to US Government officials trying to deal with things but excellent references on parallel events going on round the world, the context in Cuba at that time, etc. I am going to listen to it again!