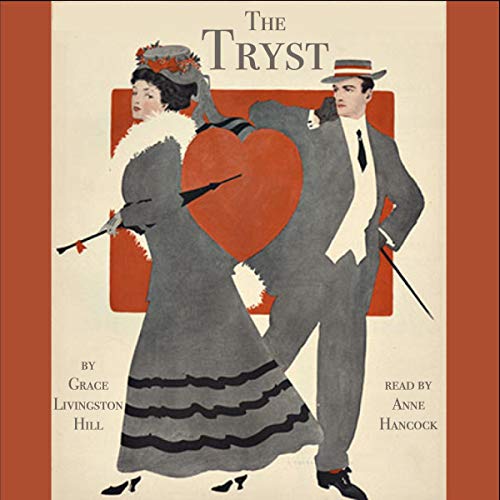 The Tryst is the story of two childhood friends, separately searching for answers.

Patty Merrill, newly returned from college, overhears her mother and sister bemoaning her presence. Hurt and confused, and not able to reach her father abroad, Patty spontaneously boards a train for New York. Her pampered life hasn't prepared her for earning a living but she happens on a position as a companion to an old lady.

John Treeves has returned from the war in Europe, disillusioned and heartbroken. His mother has died and it was her last wish that he travel to their favorite spot in the mountains to have a tryst with God and attempt to rekindle the Christian faith that he seems to have lost. The tryst becomes a turning point in Treeves' life and after much prayer and Bible readings, he resolves to become a preacher.

But to whom should he preach? Without his knowledge, his wily rich uncle engineers an offer from a New York church and it is there that he meets Patty. She is using an assumed name and denies that she's Patty Merrill. But she can't help being influenced by John's preaching and, just as he is determined to devote his life to the downtrodden, she also begins to see the light.

Part love story, part social commentary of 1920s America, The Tryst is a testament to the power of faith.

What listeners say about The Tryst

Anne Hancock again relayed the heart of the story so beautifully. Two childhood friends find their Saviour and each other after a long separation.

Patty takes a job and finds a loving and caring lady. John keeps his promise to his wise deceased mother.

Very good narration, as always, but Hancock adopted an unpleasantly scratchy voice for querulous, crotchety old Mr. Treeves. To be fair, it fit him to a tee, but it hurt my ears. However, he doesn’t appear frequently in the story.


This classic Christian story was published in 1921 and is set primarily in New York City. I was most interested in the supposedly “model” industrial housing community. Poignant social commentary on poverty here, faintly reminiscent of Dickens. The scene that sticks with me is when Patty gave her box of bonbons to a few hungry toddlers. “Then behold a miracle! For suddenly, from out of the invisible air apparently there appeared more babies, babies toddling, walking, running....all swarming a little throng about Patty....”


Yet for the most part, I could not sympathize with Patty, the runaway heiress. It was difficult to believe she was a college graduate. She seemed passive and irresponsible. She did not report her eyewitness testimony to the police when a man was falsely accused of murder. She did not contact her solicitor, as she had promised her father. And her deception towards John was unnecessary.

Lots of preaching and scriptures. It overwhelmed the story at times.


The false identity conflict continued until the end, with a very quick and loose resolution. It was unsatisfying to me.


I’m not sure this qualifies as a romance, since the couple never really spoke to each other until the final chapter, due to Patty’s false identity and — in my opinion — her flawed notion of honor.


If you like old Christian classics, I do recommend RE-CREATIONS and AUNT CRETE’S EMANCIPATION and THE ENCHANTED BARN, all written by GLH and superbly narrated by Anne Hancock.

One of her best!

I have read most of her books before, but never seen this one. It is excellent!