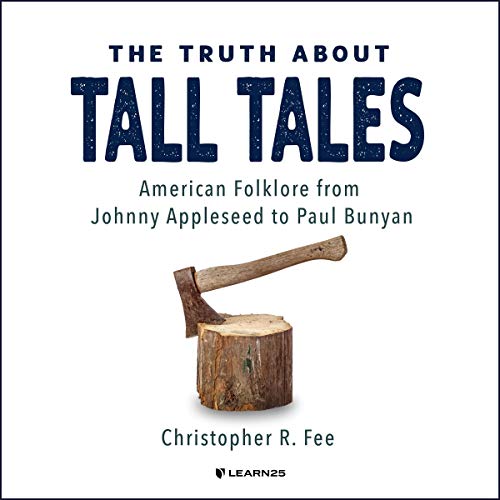 The Truth About Tall Tales

What can we learn about our culture from the stories we tell? Join master presenter Christopher Fee to learn what our heroes and monsters - both real and imagined - have to tell us about who we are as Americans.

American folklore is as vibrant and diverse as Americans themselves. Some tales offer embellished accounts of real historical figures, and in others, figures are invented to serve a cultural or commercial purpose. Often didactic and always fantastic, in one way or another these tales help us make sense of the world.

Join Christopher Fee, co-editor of An Encyclopedia of American Myth, Legend, and Folklore, for an entertaining and revealing look at our nation’s folkloric imagination. In this compelling 24-lecture audio series, you’ll meet figures such as Daniel Boone and John Henry, and learn the stories of characters such as Water Jar Boy and the Woodcutter and the Fairy. Specters also abound, and you’ll encounter frightening figures ranging from the Headless Horseman to La Llorona.

Having explored traditional forms of folklore, myth, and legend in America, you will turn to new storytelling methods, discussing genres such as conspiracy theory, urban myth, and “fakelore.” Finally, you will conclude by asking how these kinds of stories represent a search for deeper truths, which suggests why American folklore still matters so much to so many.

This course is part of the Learn25 collection.

What listeners say about The Truth About Tall Tales

Masterful series by a master professor

I've enjoyed several titles by Professor Fee. This is his best. We have three young kids with active imaginations and we seek out books and stories encourage their interest in learning and teach moral lessons. This series covers the major stories making up America folklore while providing real insides into the important truths they tell. Fee combines deep knowledge with enthusiasm and humor. You'll enjoy his talks and find much to discuss with your kids.

Fee is one of those presenters you completely enjoy and instinctively trust. He has an exhaustive knowledge of his topic but also an objectivity that helps you situate each detail in context. It's fascinating to learn the reasons why certain historical figures (or legendary characters) have been memorialized in a certain way for historical or commercial benefit. I also appreciate that Fee isn't delivering a complete debunking--he shows how the true lives of famous figures like Johnny Appleseed were still remarkable even if their stories have been hyperbolized over time. I also appreciate that Fee includes indigenous, African American, Asian American, and Hispanic American and Latinx tall tales, underscoring the point that these are all American tall tales and part of our collective imagination as a nation. Also, I learned that the legend of the Chupacabra started in 1995 on the Internet--wow!

This book brought me back to grade school in learning about these wonderful stories. Looking back, I greatly appreciate the societal context Chris Fee provides. It shines a new light on the stories and I really enjoyed looking at them with a new perspective.

Fee is a Master

Really enjoyed this. It's an in-depth (24 audio lecture) course on the history of myths, legends, and folklore in American history. Folk tales carry far more significance and wisdom than I previously realized. Fee also does a great job of bringing in a diverse set of perspectives; he includes African American folklore; Native American folklore; Hispanic American folklore and more. The presenter himself is highly knowledgeable and passionate about the topic. A must listen.