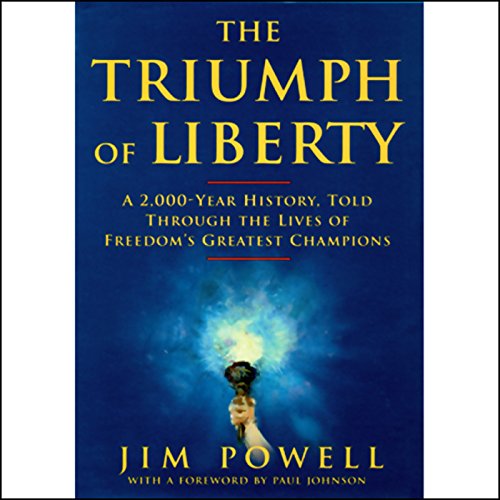 The Triumph of Liberty

Of humankind's great achievements over the past 2,000 years, one towers above all the rest: the arduous, painstaking process of wresting liberty from tyranny's iron fist. The Triumph of Liberty chronicles this, our most inspiring story, through 65 biographical portraits. From the millions of men and women whose struggles and successes have made freedom possible, Jim Powell has chosen a few talented, courageous individuals, and by weaving together their moving life stories, he tells brilliantly the saga of liberty as a whole.

Some of these men and women, like Elizabeth Cady Stanton and Martin Luther King, Jr., remain famous. Others, like John Lilburne, a seventeenth-century "Leveller" who spent most of his adult life in prison battling England's infamous Star Chamber, are almost unknown. Some of Powell's choices, Erasmus, Cicero, Locke, Wollstonecraft, and Frederick Douglass, have often before been praised by those who love liberty. Others, Ludwig van Beethoven, Leonard Read, and Louis L'Amour, may be surprising. Others still, like Milton Friedman or Margaret Thatcher, are controversial.

Any one of these life stories, based on biographies, letters, diaries, unpublished manuscripts, and interviews with leading scholars, could make a book. Taken together, they form a saga of epic proportions. Here, are the greatest achievements of humankind and the first-ever full story of the triumph of liberty.

For more than 30 years, Jim Powell has gathered material for The Triumph of Liberty. He has interviewed scholars, pursued research in major libraries, and visited booksellers, museums, and historic sites around the world.

What listeners say about The Triumph of Liberty

Jeff Riggenbach does a very nice reading of this encyclopedic history of libertarian thought and the struggle for liberty written by Jim Powell. If you are a libertarian, you will likely enjoy this book, as I did, though the brevity of some of the biographical sketches might leave you wishing for more. Powell also follows the biographical convention of adding details about each subject's family life and upbringing - which is, in my opinion, a convention this book could have done without. The passages focusing on these issues stick out like sore thumbs, especially when they are in no clear way connected to the behavior of the subject. Also, the book is written from an obviously partisan perspective on libertarianism, and though it is clear that the author wanted to present solely positive contributions, his ideological decision to gloss over Ronald Reagan's enormous credibility and ethics problems while leaving out important contributions to liberty from the other side of the political fence (i.e. Harry Truman, Woodrow Wilson, Malcolm X, John Brown) because their methods did not fit within the particular agenda espoused by this author are a little problematic. Still, the book is a very good introduction to libertarian social thought, and should be read by anybody who believes they know what being an American patriot really means.

Extraordinary insights into gems of liberty!

While I expected to hear about Thomas Jefferson, Ronal Reagan, Martin Lugher King Jr., and James Madison, the depth and breadth of this book was truly enlightening. It should be required reading for anyone with an interest in liberty. Each story is entertaining, informative and inspirational. There are so many influential people who were involved in the pursuit of liberty through the years and the author makes the connections to show how they knew and influenced each other. For anyone interested in understanding what Liberty truly means, this book could be the Cliffs Notes.

What you did not learn in history class.

This was a great book, while I did not agree with everyone the author chose to include, he does an excellent job of pointing out the greats in history. Quite honestly I had not heard the true story of over half the people covered in this book. This book just makes be want to study these greats even more.

Essential book for anyone who values liberty. So many names I had barely heard about, and yet did so much for the cause of individual freedom.

The chapters should have been better separated. A slightly bigger interval or clearly saying “Chapter x” would have helped.

A Plethora of Vignettes

A plethora of vignettes regarding individuals who fought for Liberty. An excellent starting point to get a basic understanding of who these people were and what they did. You may choose a few of these individuals and dig deeper into their story.