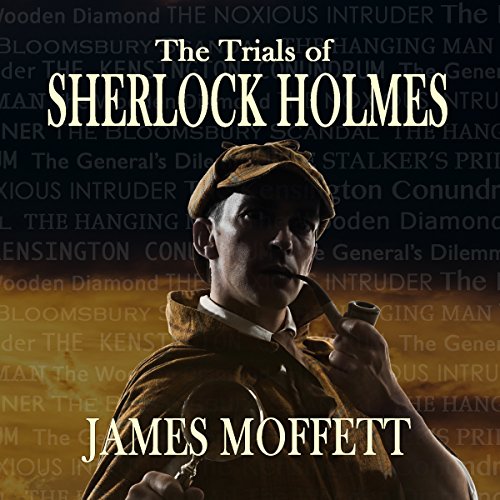 The Trials of Sherlock Holmes

It is a cold London morning in 1887, and the discovery of a dead man in an abandoned house plunges Sherlock Holmes and Dr. John Watson into a series of eight trying cases that will test the friendship of the two companions and threaten the safety of the country itself. From a staged murder to an impossible suicide, the theft of a national document to the disappearance of an entire family, London's foremost consulting detective and his faithful companion must seek out the clues and venture into the very heart of each mystery. All the while a sinister force, lurking amid the busy streets of London, stalks their every case, testing their own mental and physical prowess; ultimately they require the assistance of their closest allies, including Mycroft Holmes and the unsophisticated Inspectors Gregson and Lestrade. Will Holmes and Watson be able to avert the approaching threat that appears to be vengefully heading straight for them?

What listeners say about The Trials of Sherlock Holmes

The story was good and well written. while the narration performance was adequate at times I could hear things in the background like children playing and his breathing was heavy at times.

The sudden and unexplained leap in events from chapters 8 to 9 indicate that a chapter probably went lost during the recording session. The narrator's sometime laboured breathing is very apparent during the whole of the audio book. The switch from Holmes' account back to Watson's epilogue is too abrupt.

I am a Sherlock Holmes enthusiast and, having read, listened to and seen all of the Conan Doyle stories I thought it would be refreshing to get another take on the great character. However, this execrable version should never have been released! The story could well be perfectly functional but the reading of it is truly abominable. Whoever produced this could at least have chosen a reader who could A) read properly and B) have some enthusiasm for the subject matter. Mr Clifford is, I'm afraid, extremely un-engaging and irritating in his delivery; he sounds like he would much rather be doing something else than reading this story. I would advise avoiding this iteration of Holmes.