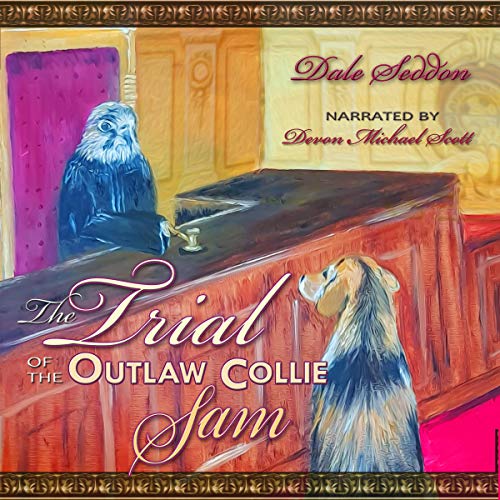 The Trial of the Outlaw Collie Sam

“I was born,” he began, “by a dumpster at noon, In a broken down doghouse with only one room, With only one window we used as a door, With rats in the rafters and mud on the floor.”

Raised by a single parent, the outlaw collie Sam and his seven siblings run wild and free, feasting on castaway food in garbage cans and chasing after humans to scare them, all for the fun of it. Then one day disaster strikes. Sam and his brothers and sisters mistakenly frighten the wrong human. The Catchers arrive at the dilapidated doghouse in the middle of the night, guns in hand. Sam is wounded. But he manages to escape.

The next day, Sam is found by a keeper, a kind human who takes the dog home and sets about training him.

“He healed my wound and he purchased a tag. I trained to the collar and re-learned to wag. It wasn’t all easy. Oh no, to be sure. I yearned for the smell of the pack and the poor. I longed for my snout in the wind and the fun, For the thrill of the free in the rush of the run. But slowly I learned that I had to obey. The Keeper was mine if I wanted to stay.”

The Trial of the Outlaw Collie Sam is so far outside the box that it’s difficult to label as anything but absolutely unique. Part poem, part fantasy, part courtroom drama, and part - a very large part - the true story of the real outlaw collie Sam, a Heinz-57 variety mongrel dog whose life and adventures were the inspiration for the story.

The Trial of the Outlaw Collie Sam and its companion story about the real Sam are both captivating tales. The story of the trial itself is beautifully told. It bounces along in an almost musical fashion - especially when the narrative poem describing it is read aloud. It provides an intimate glimpse into how “guilt” or “innocence” is established for our animal friends.

And the story about the real outlaw collie Sam? Well, that is worth listening to too, if for no other reason than to avoid making the same mistakes that the author did when Sam chose him to be his keeper. This title is perfect for middle schoolers through adults, and can be used as a humane education tool for classroom use for the discussion of social issues as well.

What listeners say about The Trial of the Outlaw Collie Sam