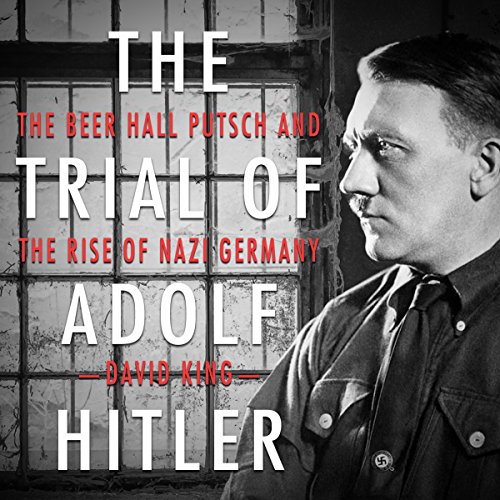 The Trial of Adolf Hitler

The Beer Hall Putsch and the Rise of Nazi Germany
By: David King
Narrated by: Jeff Harding
Length: 12 hrs and 12 mins
Categories: History, 20th Century
4.5 out of 5 stars 4.7 (3 ratings)

The Trial of Adolf Hitler

February 26, 1924 was the first day of the greatly anticipated high treason trial that would galvanize Germany - but few in the courtroom that morning anticipated that the leading defendant, General Erich Ludendorff, whose risky offensives during World War I doomed Germany to defeat, would soon be eclipsed by the private first class at his side, Adolf Hitler. Hitler was charged with treason after unsuccessfully trying to seize power in the notorious Beer Hall Putsch in Munich in 1923. Before the trial, Hitler was only a minor, if ambitious, local party leader. Yet, once the proceedings began, his days of relative obscurity were over. Including never-before-published sources, this richly informed, day-by-day account shows how Hitler metamorphosed into a mesmerizing demagogue and used his trial as a stage for Nazi propaganda. Chilling in the hypothetical questions it raises, The Trial of Adolf Hitler illuminates our understanding of Hitler's path to power.

What made the experience of listening to The Trial of Adolf Hitler the most enjoyable?

the story is great and well researched. The narrator is a pleasure to listen to - not distracting from the story at all !!!

Hey - Audible listen up - this is a great example of a great all - around book. THIS Narrator is invisible - does not distract from the book at all. So many bad narrators at audible...
Great to have this book that I will surely listen to again !!

Had always heard about the treason trial of Hitler but never got many details about the case this book adds new insights into the case and answers the question why Hitler and the codefendants got only Slap's on the wrist for treason.

Most histories of this period usually deal with the Beer Hall Putsch in a paragraph or two. This book covers the period immediately before and after the Putsch. Most importantly, it covers Hitler's trial in great detail. An important contribution to the literature of Hitler's formation and rise and to the mindset of many German civilians and military men in the 1920's.

excellent read. How Hitlers start to power after the failed putsch ... or did it fail? Interesting to see how things even today fail to change in the world of politics and law for the few. Enjoy.

The Trail of Adolf Hitler

This recording covers the events leading up to the 1923 Munich putsch, the events of the putsch and the trial of the defendants. The depth of coverage of the trial provides a insight to the complicity of the Barvarian state and judiciary in the travesty that took place in the court where a case of high treason was punished with a sentence that meant Hitler was released after 6 months - when he should have been executed or served many years in prison before deportation to Austria.

Like January 1933 this episode is another of the turning points that lead Hitler to power when he could have been stopped before he gain ultimate power.