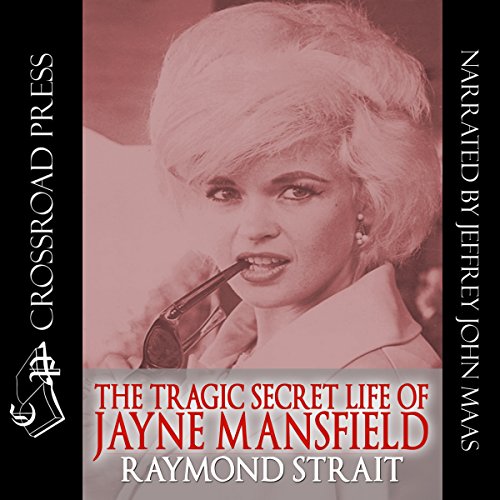 Having spent 10 years as Jayne Mansfield's press secretary, Raymond Strait knows intimately both the public image and the private person that was Jayne Mansfield. Sitting through hundreds of hours of interviews and private conversations - not only with Jayne but also with her husbands, her lovers, and her children - gave Ray the opportunity to present a revealing portrait of the woman. He records her drive for fame and success and her overpowering need to be loved and to love, needs that led her into numerous affairs with rich and powerful men - including President John F. Kennedy - and with younger men from all walks of life. And he discusses frankly Jayne's ultimately successful plan to become pregnant by Nelson Sardelli because she wanted to have an Italian child.

Known to millions as the consummate sex symbol who rivaled Marilyn Monroe, Jayne Mansfield received more press coverage than anyone else in Hollywood. The headlines were often sensational, causing society matrons and Baptist ministers to shake their heads and point their fingers. But under those sensational headlines there was a woman of greater complexity than any reporter could hope to understand. Strait goes below the surface to examine Jayne's emotions and motivations, revealing the truth about her many lovers, her three unsuccessful marriages, her love affair with Mickey Hargitay that lasted to the end, and her battle against and her surrender to alcohol and drugs.

What listeners say about The Tragic Secret Life of Jayne Mansfield

Meh. Not a prude, but I found it difficult to muster up sympathy for Jayne. Tragic ending, but really a wasted life through drugs and alcohol

What was most disappointing about Raymond Strait’s story?

I think any disappointments just came knowing that the outcome of this woman's life would end so tragically.

Would you be willing to try another one of Jeffrey Maas’s performances?

NO! This man does not know how to pronounce words! Pigalle in Paris was "Pig Alley." WTH? Silver lame gown was pronounced "lame" with a long "a" as in crippled! Mamie Van Doren was "Mammy Van Doren!" "Mammy"...as in the old Jolson song! WTF? Isn't there an audio editor? Very annoying.

I was curious about her life. Big fan of her daughter. My reaction was sadness because she brought most of this on her self through chemical abuse.

The most distracting aspect of this book is that he narrator affects a phony, sexy, breathless effeminate voice when quoting Jayne Mansfield. There are also mispronounced words. Other than that, it was an engrossing take.