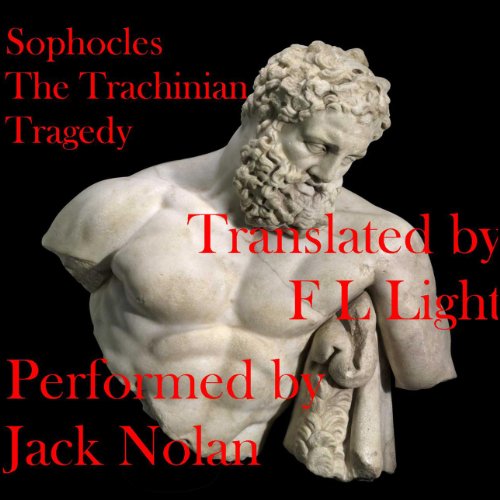 The Trachinian Tragedy: Women of Trachis

By: Sophocles
Narrated by: Jack Nolan

In The Trachinian Tragedy, better known as the Women of Trachis, the wife of Herakles, Deianeira, finds she has a rival in the house for her husband's affection. The consequences of her counteraction are incredible. In this faithful translation, F. L. Light attempts to write as good a play in English as the original in Greek. F. L. Light has also translated Antigone of Sophocles.

"It is always gratifying, it elevates the human spirit to see one our fellows...set his aim unbelievably high and incredibly hit the mark!" (David Madgalene, bilingual author of I Hear A Journeyman Singing)
"Light has blended very well the traditions of Shakespeare, Homer, and the English language sonnet, without erring on the side of pretense. The language is high, direct, and modern. I'm thrilled with these." (Zachary Bos, editor of Sixty Six: The Journal of Sonnet Studies)

What listeners say about The Trachinian Tragedy: Women of Trachis

The audio quality is terrible, like it was recorded on a laptop in someone's bathroom. Okay, that was just glib, but it's forcing me to use at least 20 words in this review.

I enjoyed this rendition of the play. The narrator was clear in his speaking and of who he was speaking for, as he would both announce and change the tone of his voice to fit whichever person was communicating at the time. I heard a great passion for the play in the narrator's voice and particularly appreciated his portrayal of Herakles while he lay in pain from the centaur's poison. There was emotion that livened the characters more than what would have been gotten simply from reading their conversations.

I thought this was a really good translation of Sophocles's play, and the narration was great as well. The narrator says the character's name before he says the character's lines, though I can still hear a bit of voice variation between the characters as well. (and since there was just one person performing the entire drama, I thought that was very impressive!) The performer's voice is also very clear, which made listening to this audio book enjoyable. This is a great translation and performance of a play, and I'm glad I found this because I don't see plays on audible as much as some other genres!

Where does The Trachinian Tragedy: Women of Trachis rank among all the audiobooks you’ve listened to so far?

Have not heard many dramas from Audible

The speeches by Herakles when he is struggling for his life. The translation is ennobling here, of Miltonic impetus.

The description how Lichas was killed or when Deianeira realizes her mistake.

This is an excerpt from a book about Sophoclean language, that it is not artless or unstylized or unpoetically easy, as transpositions are the rule in him:

“It would be absurd to represent Sophocles as an eccentric writer.
But he made subtle use of a material full of subtlety, which was
plastic to his touch, and the resulting lines are more difficult to trace
than those which have been impressed by some generally accepted
mould.’ ‘Sophocles is distinguished in point of syntax from other
contemporary writers chiefly by his noble sense of harmony and by
the combination of extreme refinement with moderation and sim-
plicity/ With passages like the ones quoted here from the Introductory'
Essay 'On the language of Sophocles’ to his edition of Sophocles, Lewis Campbell set the tone for all subsequent work
on the syntax of Sophocles. Although the language in which they
are put is less high-flown than that of Campbell, the judgments of
e.g. Moorhousc (1982} and Lloyd-Jones & Wilson are basically sim-
ilar. Thus, Moorhouse writes in the preface to his Syntax of Sophocles
(p. xiii): The end result (viz. of the ways in which Sophocles com-
bines ‘old-fashioned’ constructions with innovations) is an unusually
rich and varied collection of uses.' And Lioydjones & Wilson remark,
while discussing the difficulties one encounters in editing Sophocles’
text: There are many passages where it is
scarcely possible to know what the author wrote, since he took plea-
sure in experimenting with the syntactical resources of Attic Greek...’.

It is always nice to see historically and culturally important texts, such as the plays of Sophocles, available through audible. Unfortunately, little thought is put into the quality of the translation. This translation, while reasonably faithful to the Greek original, is excessively pedantic and full of itself. Sophocles wrote his plays to communicate important ideas to ordinary citizens, the demos. This translation does not seem to try to communicate the ideas of the text in a clear and engaging manner, but rather, seeks to demonstrate the author's erudition and facility with obscure and archaic vocabulary. The audiobook is useless as a teaching resource, since few students can navigate sentences such as "In verities I wot" or "One, as a quadruped enfigured, keratoid in height, a moiety bullish, was Acheloos..."