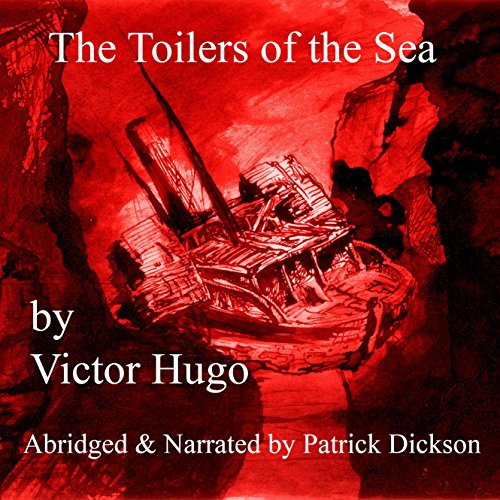 The Toilers of the Sea

Victor Hugo wrote this wonderful story while living in exile on the island of Guernsey, which is where the adventure unfolds. Set in the early 1800s, The Toilers of the Sea tells off a young reclusive fisherman who falls dangerously in love with a beautiful island girl. Her uncle, himself an intrepid seafarer, is the owner of a paddle-steamer, which plies its trade to and from St. Malo on the coast of Brittany. The vessel is wrecked on a remote reef in suspicious circumstances, and our brave young fisherman sets out alone to salvage the all-important machinery, the steam engine itself. If he succeeds, he will return home to the promised hand of the girl he daren't even talk to.

Like his contemporary, Charles Dickens, Victor Hugo paints boldly on a huge canvas. His characters are compelling and colorful. Through them, he explores the values and the morality of his times. In this novel, he pits them not only against each other and their hard circumstances, but also against the elements themselves in the rough and rocky seas of the "Norman Archipelago".

Patrick Dickson has intelligently abridged this terrific novel focusing on the drama of the adventure and the plight of its characters. Like Hugo, he spent 15 years of his life on the island of Guernsey, and he brings a unique sensibility to the storytelling. He is an actor with extensive narrating experience. This is his first self-produced audiobook.

What listeners say about The Toilers of the Sea

Victor Hugo at his best...

There is a reason why Victor Hugo is a master of the classic script. The Toilers of the Sea is an excellent example of his work and well worth listening to.

For those who enjoy a good sea story with the twists and turns that have made Victor a master of his craft. The tale of moral fortitude, stoic heroism and an end that I wish went on because it left open numerous questions of what may have been, but alas it ended.

The Toilers of the Sea is addictive and after several weeks I still savour the characters, the plot, subplots and the moral finale, they are all still active in my imagination.

Do your self a favour. Listen to this Classic Hugo.

Life with all its raw drama

A powerful story, beautifully told. The lives of the people set within the grandeur of nature. Produced with dramatic flair to add to the pleasure of listening. I was transported.

Interesting, could without the special effects

I listened to this just after Les Miserables. I was curious to read another of Victor Hugo's writings. It was interesting. The added music and sound effects were distracting, and are totally unnecessary. Avid audio book listeners do not need these. But, I'm glad to have read the book.

Not What Hugo Intended

I have read the book unabridged in the past, and sadly I find that this audiobook is not a good presentation. I found it impossible to get past the excessive abridgment, which the performer attempted to disguise with clumsy music and sound effects. The ratio of story to silly, repetitive music was very disruptive; while the reading though well-done was too rapid. Hugo ought to be savored. His writing implements the highest abstractions in concrete drama, and you need time to take it in. I simply couldn’t let go and fall into the story. Though I was grateful that someone took on the challenge of recording one of Hugo’s lesser known works, sadly I could not get past the first half hour.

Loved the narrator. I'm usually not a fan of sound effects or music in audiobooks, but it worked well. Such a great book. Scheming, shipwrecks, love, man overcoming nature, date, and heartbreak. Will be on my recommendation list.

Fantastic listening on sea side holiday

I've always wanted to listen to this book but have never found a well read version. This one however is perfect! Read by a true Guernsey man with a smattering of sound effects that really immerse you into the story. I listened to this whilst on holiday next to the sea in Cornwall and it was the perfect companion.

after visiting Guernsey I was keen on reading this book and it exceeded my expectations. not only was i transported back to that beautiful island, I loved the story and it's determination and melancholy amongst the hope it aspires. great listen.

If you could sum up The Toilers of the Sea in three words, what would they be?

Gilliatt, the hero, for his determination and generosity.

Have you listened to any of Patrick Dickson’s other performances? How does this one compare?

This is the first

Anyone who knows and loves Guernsey should listen to this.