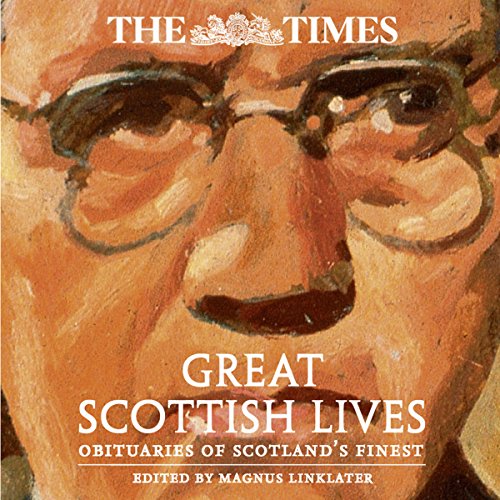 Discover the fascinating lives of the iconic figures that have shaped Scotland from the early 19th century to the present day.

Explore the rich history of Scotland's cultural, social and political landscape, with more than 100 obituaries carefully curated from The Times archive.

The Scots have contributed richly to the world, most notably in literature and science, but also in the arts, law, politics, religion, scholarship and sport. In this volume, The Times brings together a unique and fascinating collection of obituaries. The list includes people who have made the greatest impact in their fields, others who have led particularly interesting or influential lives, and a selection of notable Scottish figures in the history of The Times.

What listeners say about The Times Great Scottish Lives

As this is a collection of obituaries, some are more interesting than others. Still very interesting overall, as many of these people I had no idea were Scottish.

This is an engaging series of obituaries published in The Times newspaper starting with famous Scots who died in the early 1800s and continuing up to an example in 2017. Many are world famous, at least in the Western World, such as Robert Lewis Stevenson, Logie Baird and Andrew Carnegie, but others, such as Dr Elsie Inglis, I guess will be mostly known by Edinburgh folk reminded of her by a local hospital named after her.

The wide range of people including footballers, poets, writers, soldiers, politicians, scientists and medics makes for an entertaining and interesting listen. The chronological ordering of the obituaries illustrates how the style of writing has changed over two centuries: the early biographies written in a more elaborate style that seems florid to the modern ear.

The narrator has a pleasant Scottish accent that suits the material but I was surprised by his mispronunciation of some names, notable Alex Douglas Home, which quaintly should actually be pronounced as Hume.

An enjoyable listen probably even more so if you’re Scottish.

Is that how X is pronounced, I've often thought Y

With due acknowledgement to Samuel Johnson I was reminded of his observation that much could be made of a Scot if he be caught young. There were some interesting obits. I 'met' some new folk and resolved to get reconnect with JM Barrie.

I found it was a worthwhile listen EXCEPT for some of the pronunciations. I gave up at althogether at Douglas-Home though the narrator's stab at the surname Geddes was so painful I skipped that chapter. Pity. Sir Patrick Geddes (two syllables) was one talented chiel.