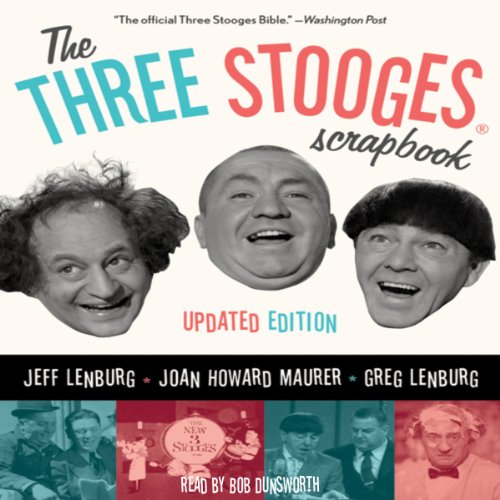 For over seven decades, fans have roared with laughter at the wild, two-fisted, knockabout antics of The Three Stooges performing their classic comedy mayhem in 200 comedy shorts, 25 features, and thousands of television and stage appearances.

This updated edition of the nationally best-selling authorized biography and team history covers the lives and careers of the Stooges like no other. Packed with personal memories, historical facts, new findings, revelations, and archived material from family collections, this meticulously researched edition has it all. Intimate biographies of each Stooge, a complete and accurately detailed team history, and the most comprehensive filmography ever compiled, including production and cast lists, synopses, release dates, working titles, production footnotes, and more from every comedy short and feature and the Stooges' solo film appearances.

Furthermore, it features exclusive interviews with the original stooges and later members of the famed comedy trio - Moe Howard, Larry Fine, Joe Besser, and Joe DeRita - and their family members and friends.

What listeners say about The Three Stooges Scrapbook

Skip the audio, get the hardcover.

* I've since learned that a physical version exists which I would recommend more than this version.

Solid but get the hardcover.

Well researched and very passionate about this wonderful group of comics. Each chapter on the each stooge's individual life lasts between 20-25 minutes. Out of 17 hours, one can't help but feel a little let down a the lack of volume on these men themselves. Especially when lengthy sections are devoted to things like a history of Stooge merchandise and record albums.

Once it gets to the filmography is become a serious grind to get through. And the filmography is the last section. Make no mistake, about half of its 17 hour duration is the narrator listing off production credits. Readings of directors, producers, actors, writers, etc for every short, movie etc. EVERY. LAST. ONE. Even if you are the kind of nutjob who needs to know who wrote/directed/filmed "Beer Barrel Polecats" to win a bet or something, good luck finding it quickly out of the 266 chapters with no chapter titles. A hardcover table book would've suited this better.

I did appreciate the commitment and the first few hours are nice but once it gets into the full filmography, it tanks. I've no doubt if this was a coffee table book, something illustrated that could be used as a quick reference to stooge shorts, history, production notes, and fun facts, it would be perfect. In audio format it's more trouble than it's worth.

What made the experience of listening to The Three Stooges Scrapbook the most enjoyable?

It is a thoroughly researched history of the Stooges, correcting a number of mistakes found in other books (and even the mistakes in the previous version of this book). I recommend picking up the physical book (which I did at our local library), just to be able to page through to see the pictures in the book.

A lot of the background and “story behind the story” for a number of the shorts.

Although the Audiobook is listed at 19 hours, really it is only 10 hours, as the last half is essentially the reading of the Filmography (which in the book is in much smaller type). I mention this as the Filmography may be a bit monotonous for the casual reader, although I personally enjoyed listening to each of the synopses.

Turns into a list of many shorts and re-released

This book starts very well, but after bios of the individuals and team, it reads as an endless list of short films. Very tedious and forgetable in the second half. I wouldn't buy this again.

A well-researched look at some old favorites, and introduces their antics to a younger generation. The narrator is quite good, gets the voices right when he needs to, even if it's not necisary, but often pauses at odd times for unknown reasons.

Encyclopedic, but also a bit repetitive

This is certainly (I can't believe I passed on the Curly pronunciation of the word) a must-have for fans. But it did get repetitive (I lost count of how many times we're told when each member died). For me, the audio version worked fine and I listened to it from start to finish. I think if I read the book, I'd probably skip over parts. I know Moe and his cohorts famously got along -- apparently, they rarely had disputes about their work, money, women -- but they must have had a few disputes. The book could have covered some of them. It could also have given more detail about their relationship with Columbia Studios (I've heard some accounts that it got very ugly at the end).

I'm glad I listened to this. If you're only a casual fan, though, you may find yourself wishing you could listen to an abridged version.

Very Dry, Not sure about the accuracy

I am actually interested in the subject and the book still seemed dry to me.