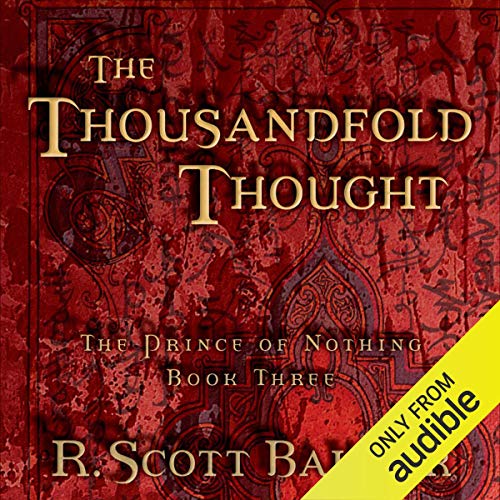 The Darkness that Comes Before, R. Scott Bakker's magnificent debut, drew thunderous acclaim from reviewers and fellow fantasy authors. Listeners were invited into a darkly threatening, thrillingly imaginative universe as fully realized as that of any in modern fantasy and introduced to one of the genre's great characters: the powerful warrior-philosopher Anasrimbor Kelhus, on whom the fate of a violently apocalyptic Holy War rests. Bakker's follow-up to The Darkness that Comes Before, The Warrior Prophet enticed readers further into the richly imagined world of myth, violence, and sorcery. The startling and far-reaching answers to these questions are brought into thrilling focus in The Thousandfold Thought, the conclusion to The Prince of Nothing trilogy.

Casting into question all the action that has taken place before, twisting listeners' intuitions in unforeseen directions, and remolding the fantasy genre to broaden the scope of intricacy and meaning, R. Scott Bakker has once again written a fantasy novel that defies all expectations and rewards the listener with an experience unlike any to be had in the canon of fantasy literature.

"The Prince of Nothing trilogy is a work of unforgettable power." ( Publishers Weekly)

The book has drained my enthusiasm for the series, so I'll just leave this warning:

Positives:
DeVries is a master of his craft, and brings to life the characters with unparalleled immersion and skill.

Bakker is amazing at worldbuilding, concepts and outlandish ideas.

Negatives:
Sadly, he's also awful at writing women and sexual scenes, which becomes extremely apparent in the many (many!) rape scenes.

The Prince of Nothing trilogy starts out promising and bold, but slowly devolves as Bakker's obsession with Rape, Snuff, Sex and Suffering take over. Not only does it turn into a bland morass of anguish, the quality of the writing and prose- that is so impressive most of the time- takes such a nosedive it turns into fanfic levels of "erotica".

You'd think I could overlook this in favor of all else that is good, but sex and rape grow in importance until it seems every other chapter includes it- it blots out all else.

After listening to the last ten minutes I sat dumbfounded for a good five minutes. Suddenly things foreshadowed and subtle tidbits started to make sense. The tingling sensation when you realize you've just read something awesome kicked in; it continues as I write this.

I have a feeling the ending of this series could polarize readers much like the First Law Trilogy. I however loved it.

I understand that it is impossible to just "walk away" from a story that has been thousands of pages in the making. I just felt like this was forced. The ending left me frustrated instead of satisfied. Very interesting and fun for the most part, but certainly not one I would do again.

Awesome conclusion to an amazing trilogy.

Great trilogy, great author, fantastic narration. Love it. It isn't an easy read if that's what you're looking for but it certainly blew my mind.

What could R. Scott Bakker have done to make this a more enjoyable book for you?

Not having an hour long intro with a very poor story line.

He could have used multiple tones of voice and inflection instead of being monotone.

I'm not sure whether or not this book was poor because of the presenter or the writer. It reminded me of my childhood in school when my teacher would tell me "Don't tell me show me!".

Great book. Very enjoyable but like the previous books it moves very slow. The ending climax was disappointing and at times it became difficult to root for anyone. I'm glad I listened to it but I won't be getting the others books because it takes so long for anything to happen.

the narrator continues to do an excellent job here lending authority to the prose. This is a great conclusion to the opening act of the second apocalypse sequence.