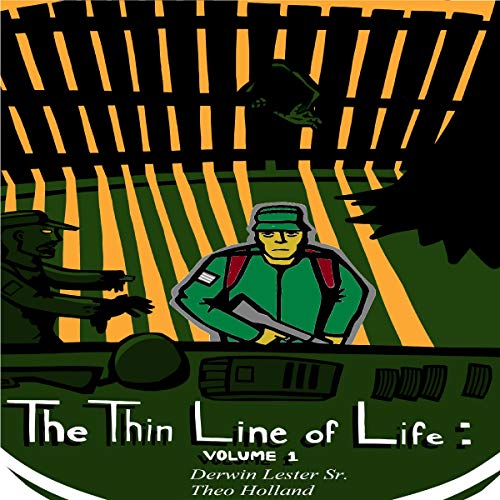 The Thin Line of Life: Volume I

The Thin Line of Life: Volume I

Corporal David McAllister was a good old boy from the mountains of Kentucky. He did his time in Afghanistan with the Marine Corps Reserve, and was reaping the rewards of the G.I. Bill as he short timed the last six months of his contract. In the grand tradition of the McAllister clan, he found himself a proper woman in college and was going to take over the old homestead once he graduated. But one day a report came on the news about a virus spreading through China, turning the locals into cannibals. The virus hit Singapore. Tokyo. Mexico City. El Paso. Then Louisville. David was called up for active duty again, and the virus was all around him.

Collecting the first three Thin Line of Life books, this omnibus, The Thin Line of Life: Volume 1, tells the linear story of the Zombie War in a non-linear manner, jumping back and forth throughout the time of destruction as America fights to live.

What listeners say about The Thin Line of Life: Volume I

This is a very interesting story and view on how the human race could be wiped out by a virus. If you like stories about the zombie apocalypse theory then you would enjoy this. The story does jump around a lot from each location and group of people which is why I gave the story part of the review 4 stars. I'm usually listening to my books before work, on the commute to work, or on road trips. It was a little hard to follow for my tired mind when it was moving from story to story. You just have to think of this as a bunch of short stories. I will say each one was interesting and I did enjoy them. Some of the details get pretty gory of course....I mean it is zombies eating people after all. Haha!!!! So just listen to it when little ones aren't around. I have to say the narrator did an excellent job telling the story. I especially loved the sound effects when people were speaking over the radios and things. It made you feel like you were really listening to the characters and it put you right in the scene with them. I love how many characters Holland was able to keep track of and each one had a unique dialogue and voice. It amazes me how much time and effort he puts into planning out and keeping track of all these characters. He is so talented!!!

The voice of Michigan!

I’ve enjoyed Derwin Lester’s writing, be it Sr. or II, so I was excited when I was able to pick up several of his novels and/or short stories. I found it interesting that several of the Lester family are participating in this series. We’re presented with a viral plague, turning infected into ravenous, flesh-eating zombies. This alone is nothing new or noteworthy. It is the emotion and realism in the telling that stands out. The characters are well-developed and likable. This first volume conveys several survivor’s stories; the roles they played during the event, and the effect the experience had on each of them. The accounts are emotional and gritty. I was given this free review copy audiobook at my request and have voluntarily left this review.