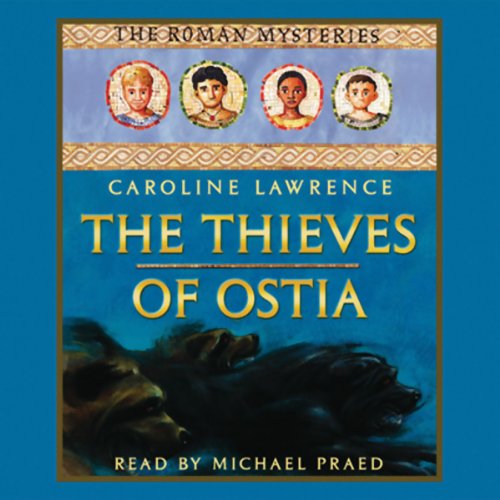 The Thieves of Ostia

Set in a graveyard, marketplace, and courtyards of a Roman city, this fast-paced mystery paints a vivid picture of life in ancient times.

The place is Ostia, the port of Rome. Flavia Gemina, a Roman sea captain's daughter, is about to embark on a thrilling adventure.

When the dogs on Flavia's street start dying, she is determined to find out who is killing them and why. Her investigation leads her to three extraordinary people: Jonathan, her new neighbor; Nubia, an African slave girl; and Lupus, a mute beggar boy. They become firm friends as they search for the killer, narrowly escape being kidnapped by a slave dealer, and uncover a series of burglaries.

"This historical mystery offers an intriguing glimpse into the customs, attitudes and class systems of the Roman empire. Ages 9-14." ( Publishers Weekly)
"The information is skillfully woven into the story....An enjoyable mystery, and more." ( School Library Journal)

What listeners say about The Thieves of Ostia

The Thieves of Ostia is an amazing story with interesting characters and a mind blowing story line. It is an inspiring book for young detectives. The story starts with a small mystery where Captain Geminus' ring was stolen. This mystery leads on to a fascinating story involving beheaded dogs, a gold thief and a lighthouse drama. I guarantee that you will be riveted throughout and that the culprit will be suprising! Overall, this is a fantastic book with lots of information about how the Romans lived.