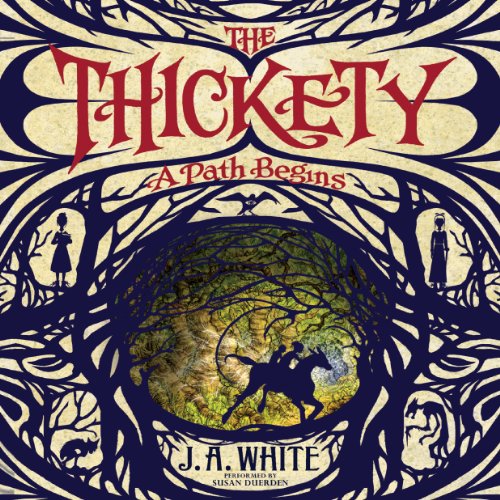 By: J. A. White
Narrated by: Susan Duerden

Hand in hand, the witch's children walked down the empty road.

When Kara Westfall was six years old, her mother was convicted of the worst of all crimes: Witchcraft. Years later, Kara and her little brother, Taff, are still shunned by the people of their village, who believe that nothing is more evil than magic…except, perhaps, the mysterious forest that covers nearly the entire island. It has many names, this place. Sometimes it is called the Dark Wood, or Sordyr's Realm. But mostly it's called the Thickety.

The black-leaved trees swayed toward Kara and then away, as though beckoning her.

The villagers live in fear of the Thickety and the terrible creatures that live there. But when an unusual bird lures Kara into the forbidden forest, she discovers a strange book with unspeakable powers. A book that might have belonged to her mother.

And that is just the beginning of the story.

The Thickety: A Path Begins is the start of a thrilling and spellbinding tale about a girl, the Thickety, and the power of magic.

What listeners say about The Thickety

This is a pretty good start to a series. Thickety is the story of a witch who grows up in an anti-witch cult. It is an engaging piece, and I will listen to the next book in the series. The only problem is the narration. The narrator reads the entire book as if it is a movie trailer and every sentence is the cliffhanger. It is unbelievably annoying. In addition, her small adult's voice (a.k.a. kid's voice) is uninspired, flat, and uninteresting.

A character too smart for her story

The world building in this book does it's darnedest to come across as a legitimate town with people who aptly believe in the lore of their civilization. It comes across as well thought out and beautifully/creepily imagined.BUT, the main character lives in this world, understanding far too much of how things are and the nature of her town's existence to actively allow all the horrible things that are done to her; or to further the story by committing actions that go against any sense of mental awareness she has displayed.Frankly she is described as too perfect a person, making nearly everything in the story insufferable, by her not living up to the narration, or just an unending slew of depressing things happening to "too good" a person

The Hero's Guide to Storming a Castle!

The one moment in the book that has the most weight, but ruins the latter half of the book is when she is being accused of witchcraft by some boys in town and her father, regaining his mental composer, has the wherewithal to ask these boys what they were doing at his house in the middle of the night. A beautifully built moment that proves her father capable of being a father once again.

Do you think The Thickety needs a follow-up book? Why or why not?

IT ended on a cliffhanger, so it needs completion, but I don't think I'll be reading it anytime soon.

A story that kept my attention, but by the beginning of the climax I was rolling my eyes continually. And a twist at the end that, if you think about it, makes you want to smack yourself for picking the book up to begin with.

Susan Duerden probably has the most diverse vocal range for a story full of varying ages and gender characters. The only negative comment I would leave is that her narrative ability is marred by a sing-song lull. Otherwise, she did a magnificent job of telling a magical tale.

The story is great it has a lot of lessons in it but the reader is not that great the voices are very high pitched and get very annoying,

I’m 49 and I loved this series. The writing style is quality, and the tone and mood is distinct. I personally found the protagonist sometimes annoying but it didn’t ruin the books for me at all. Taking in the Thickety series was like taking a trip thru a mysterious fantasyland, with some surprisingly high-stake storylines and wince-worthy betrayals that I’d expect more from adult fiction. Maybe this is similar to Harry Potter in that way? The protagonist goes thru some serious s and fights some very powerful evil over the series.

I'm curious as to where this story goes from here...the next book will tell me if I truly like it or not.

Inventive story but a little cliched and long

What did you love best about The Thickety?

The thickety itself being the most interesting element - I wish there had been more about it in the story. I also liked the idea of the grimoire being like a living thing

Which character – as performed by Susan Duerden – was your favorite?

I wasn't aware that she did all the voices - if she did - she does a great male voice. I liked the voice of Sordyr

Spoiler alert - when her brother was healed

The themes of being the daughter of a witch and being an outcast are well worn - I feel like I've heard this story many times before. Certain elements were fresh and new - like the mechanical bird that watches Kara, the spells appearing in the Grimoire - after you have perfected them, etc. But overall, a great listen and would make a great movie - if paced better.